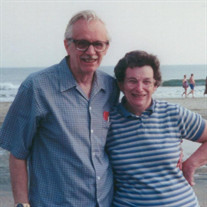 Walter F. “Walt” Bain, 91, of Culpeper, VA, passed away Monday, Aug. 30. He died peacefully at home, surrounded by family. Walt was preceded in death by his parents, George and Evelyn Bain; his brother, George Bain; his sister, Helena Howe; and his beloved wife of 64 years, Rita Bain. He is survived by eight children: Sharon Ridgill (Steve), of Asheboro, NC; George Bain, of Bealeton, VA; Sue Bain, of Annapolis, MD; Walter Bain, Jr., of Bluemont, VA; Sandy Bain, of Strasburg, VA; Shelley Berry (Alex), of Danese, WV; Dan Bain (Kim), of Knightdale, NC; and Bryan Bain, of Arlington, VA. He is also survived by 12 grandchildren and 13 great-grandchildren. Walt was born in Orange, NJ, on April 3, 1930. He met Rita while attending high school in Ballston Spa, NY. He married her on Sept. 9, 1951, while attending Syracuse University, where he also joined the local chapter of Alpha Tau Omega fraternity and played intramural football. Walt received a Bachelor of Science degree in Physics from Syracuse University in 1952 and began a long and distinguished career as an ionospheric physicist. He specialized in wave signals and their practical use in defense applications, and received a U.S. Patent for a Signaling System in September 1989. He was also known for dancing the Twist at company picnics and parties. Walt was a lifelong chess enthusiast and amateur radio operator. He belonged to multiple chess clubs, consistently winning tournaments across Virginia and Maryland. He taught the game to local youth as well as advising high school chess clubs. He was also an active volunteer with the Boy Scouts of America and served as a judge at high school science fairs. The family held a private viewing on Sunday, Sept. 5 at Found and Sons Funeral Chapels & Cremation Service in Culpeper, where they plan to hold a memorial service at a later time. Walt will be interred at Hillcrest Memory Gardens in Jeffersonton, VA. In lieu of flowers, the family asks that donations be made in the name of Walt Bain to The Michael J. Fox Foundation for Parkinson’s Research (michaeljfox.org/donate). An online guestbook and tribute wall are available at www.foundandsons.com Found and Sons Funeral Chapel of Culpeper is serving the family.

The family of Walter F. "Walt" Bain created this Life Tributes page to make it easy to share your memories.

Send flowers to the Bain family.