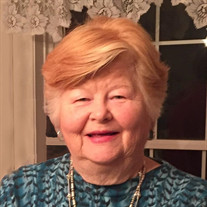 Sondra “Sonni” K. Beranek, 83, of Locust Grove, Virginia peacefully passed away on September 9, 2021 at the Manor Care Health Services-Richmond, Virginia after complications from cancer. Sondra was born on February 16, 1938 in Cedar Rapids, IA. She is preceded in death by her parents Beatrice Louise Knutson (Wigdahl) and Milo Garlock Knutson. Sondra is survived by her husband John “Jack” R. Beranek, her children Kara L. Wade (Beranek) (Paul) of Richmond, Virginia, and John M. Beranek (Karen M. Park) of Ann Arbor, Michigan, her grandchildren Dawson D. Wade and Wyatt J. Wade and her brother Peter O. Knutson (Janet) of Cape Coral, Florida. Sonni received a bachelor's degree from the University of Wisconsin at La Crosse in 1960. Upon graduation, she began her career at the Social Security Administration in Chicago, Illinois. She and Jack married on September 2, 1961 and resided in La Crosse, Wisconsin. She continued her career there as a social worker. In 1964 they moved to Bettendorf, Iowa, and made moves to Louisville, Kentucky and then to Woodbridge, Virginia. During this time Sonni focused on raising her children. In 1979 Sonni resumed her career with the federal government. She had a twenty-year career as a Logistics Officer. At retirement she and Jack settled in Locust Grove, Virginia at Lake of the Woods. Throughout her life Sonni was an active community volunteer. She was a member and chapter president of the American Association of University Women (AAUW-Davenport, Iowa). She was a passionate crafter and was a member and served as a president of the Dale City Arts and Crafts Club. She was a member and past president of the Lake of the Woods Garden Club. She was talented in flower arrangement and won several Flower Show awards for her creativity. Sonni was always cheerful and giving to others. She loved to entertain, welcomed all to her home and was beloved to all who knew her. A memorial service will be held Friday, September 24, 2021 at 11:00 am at St. Luke’s Lutheran Church, 1200 Old Rixeyville Road, Culpeper, VA 22701 with Pastor Jessica Darty officiating. Interment will follow at Culpeper National Cemetery, 305 US Avenue, Culpeper, VA 22701. An online tribute wall and guestbook are available at www.foundandsons.com Found and Sons Funeral Chapel of Culpeper is serving the family.

The family of Sondra "Sonni" K. Beranek created this Life Tributes page to make it easy to share your memories.

Send flowers to the Beranek family.