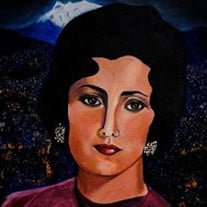 Silvya De Sousa, adored mother, grandmother, sister, aunt, cousin, teacher, friend, and daughter of the general who led Bolivia during the 1952 Agrarian Revolution, passed away at her home in Fredericksburg, VA early Sunday morning, January 17. Though she lived for much of her adult life in Northern Virginia, Silvya was ever a Bolivian. She was born in La Paz on February 18, 1937. Her father, Humbertó del Rosario Torres Ortíz, a career military officer, led his family, including Silvya, her mother, Alicia Sanjinés Vidaurre, and her two siblings, Gloria and Beto, on adventures across Latin America as well as overseas. From 1938 – 1942, Silvya and her family lived in Turin, Italy, where they endured the bombs of World War II. From 1946 – 1948, they lived in Santiago, Chile, where Silvya’s father served as Bolivia’s military attaché. Her best memories of that period were of her parents reading books at night, tales of great adventures–Robinson Crusoe, The Count of Monte Cristo, The Three Musketeers. In 1949, they moved to Roboré, Bolivia, a jungle town on the road between Santa Cruz de la Sierra, Bolivia and the Brazilian border. Always surrounded by nature, Silvya recalled this as one of the most enjoyable times of her life. She adopted a capuchin monkey, and named her, Petiti. After school, Silvya and her friends would go down to the river. “I remember the beautiful stones in the riverbed,” she said. “They felt soft on your feet, as if they were welcoming you.” The revolution that suddenly broke out in La Paz in April 1952, and her father’s leadership position in the government, gave Silvya a unique vantage. Upon her death, she was one of a diminishing handful of people with a first-hand account of the war. In 1951, Bolivia’s President, Mamerto Urriolagoitía, appointed a military junta including Silvya’s father and two other generals to lead the country. They committed to deliver an election to the people of Bolivia and promised to halt what they feared was an attempted Sovietization of Bolivia. The three generals remained in power for eleven months. On April 9, 1952, the junta lost control of the military police force stationed in La Paz, an event which initiated the revolution. On April 11, 1952, three days after the fighting began, the revolution ended. Victor Paz Estenssoro became the president of Bolivia. Military loyalists ushered Humbertó into exile in Peru. One year later, Silvya, her mother, and her siblings, joined him there. Silvya was sixteen years old. “We had very little money,” she said. “No possessions. Just ourselves. But with the help of a few people, we made it work.” It was a hard time, but it created some positive memories. Many nights from their rooftop, with Arequipa’s Misti volcano in the background, Silvya and her family would stargaze. “It seemed we could see the whole universe,” she said. With an invitation from Bolivia’s President, Hernán Siles Zuazo, reflecting an effort to reconcile wounds from the war, Silvya, her mother, and siblings, returned to Bolivia in 1958. Their father joined them two years later. Around that time, Silvya met Joe De Sousa, who was among the first group of North Americans to join the Peace Corps, and who was stationed in La Paz. They were married in La Paz in 1965. Their first child, Richard, was born shortly after. Two and a half years later, while living in Bogota, Colombia, where Joe worked for the US State Department, they had a second child, Robert. Pursuing the diplomat’s lifestyle, a few years later, they were off to Addis Ababa, Ethiopia where their third child, Alice, was born. In 1975, Silvya and her family moved to McLean, Virginia, and began a suburban life. She worked for fifteen years as a school counselor in the Arlington Public School System, notably at Williamsburg Middle School. In this role, naturally, she cared for immigrant children, always endeavoring to treat them with the dignity and respect they deserved. A wonderful and humble woman with an extraordinary story. Throughout her life, Silvya retained a deep love for her country, Bolivia, its people, customs, food, and environment, especially the mountains, most prominently Mt. Illimani, which she never tired of viewing. She was a devout Catholic and member of St. John’s Church in McClean as well as St. Jude Catholic Church in Fredericksburg. Her three children, nine grandchildren – Daria, Rachael, Brian Russell, Charlie, Michael, Antoni, Holland, Victor, and Ian – brother, Beto, nieces, nephews, and many cousins, including a large and loving assembly of Bolivians residing in Northern California, survive her. She will be buried in the La Paz Cemetery, next to her father and mother.

The family of Silvya Glayds De Sousa created this Life Tributes page to make it easy to share your memories.