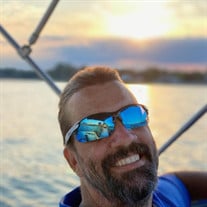 Saul “Seahawk” Charles Tocker, 51 of Culpeper, passed away Sunday, December 20, 2020 at his home surrounded by his loving wife and children after a long and difficult 5-year battle with cancer. He was born April 3, 1969 in Baltimore, Maryland to Sandee Stein and the late Carl Tocker. A dedicated husband, father, brother, son, Saul was greatly loved by many friends and extended family. He was an avid sports fan and loved his Seattle Seahawks and Baltimore Orioles. He was also quite the connoisseur of good bourbon and fine cigars. A big bear of a man, he was known for his big, infectious smile, and the propensity to lovingly slap you hard on the back when greeting you. He had the distinct gift of giving everyone his undivided attention during each encounter. Tocker was a true Patriot who recently retired after 30 years of faithful service to the FBI. On September 11, 2001 Saul responded to a call for assistance at the Pentagon following the terrorist attacks that shaped our nation’s history. Because of his efforts to render aid, and the conditions in which he experienced that fateful morning, Saul suffered injuries that manifested in his cancer fight order the past 5 years. At his retirement ceremony, his many contributions and the indelible mark he left on espionage, counter terrorism, and national security were recounted. He was presented with multiple plaques and coins, and a flag that had flown in his honor over the Pentagon, FBI Headquarters in Washington, DC, and the FBI Field office. Saul worked on some of the most significant FBI cases in recent history, to include the convictions of the former FBI agents Earl Pitts and Robert Hanssen who had sold American secrets to Russia. His colleagues remember him for his leadership, kindness, and his personal sacrifices. Saul is survived by his wife of 25 years, Laurice (Jensen)Tocker, his children; Zachary Tocker, and Rachel Tocker, sisters; Donna Cohen and Marla Mulcahy, brother-in-law William Jensen, and sisters-in-law Maribeth Doolin (Drew), and Alicia Jensen. He leaves behind several nieces, nephews, extended family and loving friends. He was preceded in death by his father Carl Tocker, and Stepfather Joseph Stein. A visitation will be held Sunday, December 27, 2020, 2:00 to 4:00 pm at Found and Sons Funeral Chapel, 850 Sperryville Pike, Culpeper, VA. Due to COVID-19 mandates, masks are required to enter the building. Interment will be held on Monday, December 28, 2020 at 11:00 am at Fairview Cemetery, Culpeper, VA, followed by a funeral service at 12:00 pm at Found and Sons Funeral Chapel. The family invites those who are unable to attend to view the service via livestream at https://www.oneroomstreaming.com/view/authorise.php?k=160866743591701 An online guestbook and tribute wall are available at www.foundandsons.com Found and Sons Funeral Chapel of Culpeper is serving the family.

Saul &#8220;Seahawk&#8221; Charles Tocker, 51 of Culpeper, passed away Sunday, December 20, 2020 at his home surrounded by his loving wife and children after a long and difficult 5-year battle with cancer. He was born April 3, 1969 in Baltimore,... View Obituary & Service Information

The family of Saul Charles "Seahawk" Tocker created this Life Tributes page to make it easy to share your memories.

Send flowers to the Tocker family.