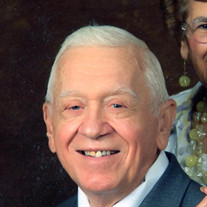 Kitts, Richard A. Colonel (Retired), U.S. Army Corps of Engineers Col. Kitts died from natural causes on Wednesday, August 25, 2021. He was 90 years old. He is survived by his wife of 69 years, Evelyn Kitts (nee Pistory), and his children, Richard (Susan) Kitts, Elaine Reed, and Steven Kitts; by his grandchildren and his great-grandchildren; and, by his brother James Kitts. His daughter Kathleen Dale preceded him in death. Col. Kitts had a distinguished military career during which he was awarded various medals and honors. He was a combat veteran having served in the conflicts of the Korean War and the War in Vietnam. Col. Kitts enjoyed working with his hands. He planned and constructed several home improvement projects and designed and undertook several landscaping projects including his building a beautiful shrine to the Blessed Mother in his backyard. He was a devout Catholic and a parishioner at the Precious Blood Catholic Church where he served with the Knights of Columbus. A visitation will be held on August 31, 2021, from 6:00 p.m. to 8:00 p.m. at Found and Sons Funeral Home, 850 Sperryville Pike, Culpeper with the liturgy of the word starting at 6 pm. A Mass of Christian Burial will be held at 10:00 a.m. on September 1, 2021, at Precious Blood Catholic Church, 114 East Edmondson Street, Culpeper, VA 22701. Interment will begin at 12:00 p.m. on September 2, 2021, at Blue Ridge Cemetery, 121 North Altamont Avenue, Thurmont, MD 21788 with military honors provided by the Maryland National Guard and American Legion Post #168. In lieu of flowers, contributions may be made in his memory to Precious Blood Catholic Church or Heartland Hospice, 493 Blackwell Rd., Suite 319, Warrenton, VA 21186. A guestbook and tribute wall are available at www.foundandsons.com. Found and Sons Funeral Chapel in Culpeper is serving the family.

Kitts, Richard A. Colonel (Retired), U.S. Army Corps of Engineers Col. Kitts died from natural causes on Wednesday, August 25, 2021. He was 90 years old. He is survived by his wife of 69 years, Evelyn Kitts (nee Pistory), and his children,... View Obituary & Service Information

The family of Col. (Ret) Richard A. Kitts created this Life Tributes page to make it easy to share your memories.

Send flowers to the Kitts family.