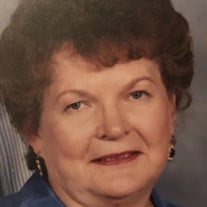 Patricia Ann Nolta-Cashman, 79, of Fredericksburg, passed away peacefully on Tuesday, October 6, 2020 after a valiant fight against Parkinson’s Disease and cancer. Pat married Thomas Nolta in 1960 and became an Army wife. God blessed them with four children, but cursed them with four boys! Pat lived most of her military life at Fort Belvoir, Va. where Thomas was stationed. Then, when he retired, they moved to Woodland Park, Co. They loved living in the mountains, fishing and boating on the lake nearby, and observing all the wildlife and beauty that surrounded them. After her husband passed away, she moved back to Virginia to be closer to her sons, settling in Fredericksburg. She later married Bill Cashman, and they decided to move to Colorado. Bill had always wanted to live in Colorado, and she was excited to share with him the knowledge and experience she had. Bill passed away while they lived there, and Pat decided to resettle in Virginia to be closer to her sons and their families once again. Pat was preceded in death by both husbands, and two sons, Mark Nolta and Matthew Nolta. Pat is survived by two sons, Mike Nolta and Chris Nolta, and all of her sons’ families. A Memorial Mass will be held at 2:00 pm on Friday, October 16, 2020 at St. Jude’s Catholic Church, 9600 Caritas St., Fredericksburg. In lieu of flowers, please make donations in Patricia’s memory to your choice of the following charities: Parkinson’s Foundation at parkinson.org/donate or The Humane Society at humanesociety.org/how-you-can-help or St Jude Catholic Church, Fredericksburg at (540) 891-7350 or St. Jude Children’s Research Hospital at stjude.org/donate.

The family of Patricia Nolta Cashman created this Life Tributes page to make it easy to share your memories.

Send flowers to the Cashman family.