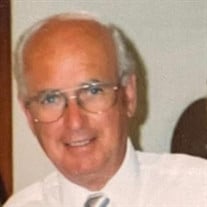 Levi Davis Brown, of Culpeper, Virginia, passed away on March 8th while visiting family in Oregon. Levi was born on January 28th, 1930 in Culpeper to Russell and Odie Brown. He was the fifth of six children. Although the state recorded his official birthdate as January 28th, his family always celebrated January 31st as his actual birthday. Levi served in the United States Army from 1951 through 1953. He loved sharing memories of time spent in Germany and France during his service. He also loved motorcycles, particularly Harley Davidsons. In his younger days, he spent many happy hours riding with his friends. He especially enjoyed traveling to Daytona Beach, Florida to attend motorcycle races. In September of 1954, Levi eloped with his fiancé Ethel Mae Fincham. They were married for 67 years, sharing many adventures and travels together. Levi retired from the Virginia Department of Highways and Transportation. He began work pumping gas, moved on to become a specialized mechanic and eventually retired as a district shop supervisor. Levi was an active member of the community. He loved traveling, meeting people and having conversations with everyone he met. He was a member of the Culpeper United Methodist Church, and a member of the VFW and American Legion. Throughout the late 1970s and 1980s, he volunteered countless hours with local 4-H clubs. He happily covered hundreds of miles transporting his daughter and fellow club members to and from club meetings, competitions, parades and fairs. He always looked back on those days as some of his fondest memories. Levi was a longtime member of the Masonic Lodge and past Master of our local Masonic Lodge, Fairfax Lodge # 43 A.F. and A.M.. He was a 32nd degree Scottish Rite mason and, a Shriner. Masonry had a profound influence upon his life and he always held his Masonic brethren in the highest regard. Levi loved all things western, especially classic cowboy movies and B-westerns. He was a member of a B western movie fan club "The Saddle Pals" and enjoyed portraying the Lone Ranger at festivals. The group often participated in fundraising for disadvantaged children, particularly at Christmastime. Levi and his family enjoyed square dancing. Levi and Ethel Mae were members of two square dance clubs, The Culpeper Lords and Ladies and the Greene County Cloverleafs. Over the years, they formed lasting friendships with many fellow dancers from clubs across the state and elsewhere. Levi was preceded in death by his mother, father, five siblings and an infant son. He is survived by his wife Ethel Mae, daughter Michelle and son-in-law Ray Smith and two grandchildren, Hannah and Levi. Family night and visitation will be held on Thursday, March 17, 2022 from 6 p.m. to 8 p.m. at Found and Sons Funeral Chapel, 850 Sperryville Pike, Culpeper, VA 22701. A funeral service will be held Friday, March 18, 2022 at 11 a.m. at Found and Sons Funeral Chapel in Culpeper with Pastor John Hemming officiating followed by Masonic Rites. The family invites those unable to attend to via livestream at https://view.oneroomstreaming.com/authorise.php?k=1647396218172818 Interment will follow at Fairview Cemetery with honors provided by Culpeper VFW Post 2524. For those seeking an alternative to flowers, please consider making donations to the Shriners Hospital for Children at https://donate.lovetotherescue.org and/or Saint Jude's Children’s Research Hospital at www.stjude.org. An online guestbook and tribute wall are available at www.foundandsons.com Found and Sons Funeral Chapel of Culpeper is serving the family.

Levi Davis Brown, of Culpeper, Virginia, passed away on March 8th while visiting family in Oregon. Levi was born on January 28th, 1930 in Culpeper to Russell and Odie Brown. He was the fifth of six children. Although the state recorded his... View Obituary & Service Information

The family of Levi Davis Brown created this Life Tributes page to make it easy to share your memories.

Levi Davis Brown, of Culpeper, Virginia, passed away on March...