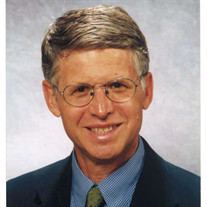 Larry Elwood Thomson, 76, of Culpeper, Virginia, died peacefully on Saturday, August 14, 2021. Larry was born on August 21, 1944, in Arlington, Virginia, to his parents Elwood Thomson and Lenore Goltry Thomson. He is survived by his wife, Jane Hudson Thomson; brother, Paul Eugene Thomson and his wife Geraldine Rosaler Thomson, of Springfield, Virginia; brother, James Edward Thomson, of Arlington, Virginia; his three sons, Clay Elwood Thomson of Charlottesville, Virginia and his wife Emmy Kenan Thomson; Neil Davis Thomson of Isle of Palms, South Carolina and his wife Jacqueline Tyler Thomson; and Weatherford Braden Thomson of Mersch, Luxembourg and his wife Amanda Bellanca Thomson. Larry was the proud grandfather of Emma Parrish Thomson and Graham Kenan Thomson of Charlottesville, Virginia, Neil Davis Thomson, Jr. and Torri Tyler Thomson of Isle of Palms, South Carolina, and Joan Huguette Thomson of Mersch, Luxembourg. He is also survived by his two stepsons, Hudson Hull Martin and David Andrew Martin, both of Culpeper, Virginia. Larry was preceded in death by his parents and his first wife, Kay Davis Thomson, who he was married to for 22 loving years. He attended Washington-Lee High School and earned a Bachelor of Science from the University of Richmond. Larry began working at Rental Uniform Services in 1971 first as controller, then served as Vice President for RUS’ holding company, Omni Services, Inc. for many years. He was a member of the Culpeper Presbyterian Church and served on several community boards, his favorite being the Culpeper Memorial Hospital Board of Trustees from 1999-2008. Larry is an Army Veteran who served in the Vietnam War. He was a devoted husband, father, stepfather and grandfather, and a friend to many. Larry loved golf, tennis, and conversations with his family and friends. His family thanks the staff at The Culpeper for their love, kindness, and care for Larry during the past two years. A funeral service will be held on Friday, August 20, 2021, at 1:00 pm at Culpeper National Cemetery (305 US Avenue, Culpeper, Virginia 22701 - Chandler Street entrance). Military honors will be provided by VFW Post 2524. Immediately following the service, a reception celebrating Larry’s life will take place at Prince Michel Vineyard (154 Winery Lane, Leon, Virginia 22725). In lieu of flowers, donations may be made in his name to Culpeper Presbyterian Church (215 South Main Street Culpeper, Virginia 22701) or a gift in Larry’s honor to the University of Virginia Health Foundation’s Department of Neurology / noting “Parkinson’s Disease Research Fund – 15789” (online donation: giving.uvahealth.com). An online tribute wall and guestbook are available at www.foundandsons.com Found and Sons Funeral Chapel of Culpeper is serving the family.

Larry Elwood Thomson, 76, of Culpeper, Virginia, died peacefully on Saturday, August 14, 2021. Larry was born on August 21, 1944, in Arlington, Virginia, to his parents Elwood Thomson and Lenore Goltry Thomson. He is survived by his wife,... View Obituary & Service Information

The family of Larry Elwood Thomson created this Life Tributes page to make it easy to share your memories.

Send flowers to the Thomson family.