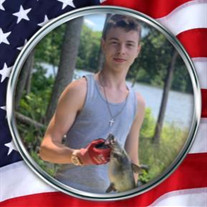 Justin Rose, 18 of Stafford, gained his Angel wings on August 17th, 2021 at VCU Hospital in Richmond, Va. He fought a long and courageous battle against Leukemia, but due to complications of Crohn's and Aplastic Anemia brought on by the chemo treatments his body became so tired and weak. God took him to his heavenly home to heal and suffer no more. Justin attended both Massaponax High School and Stafford High School making many friends along the way. He excelled in masonry and did small engine repairs taught by his grandpa, Earl. One of his goals he'd planned after graduation was to be a mechanic, just like his grandpa. He loved to fish every chance he got and target shooting matches. Justin had a kind heart as he loved and cared for many animals. He took every class they had in animal care during his years at Massaponax High School, setting up an aquarium for his classroom. Justin had several aquariums at home where he was successful at breeding fish, even shrimp. He had a bearded dragon named Paul. Justin worked with alpacas at the Virginia State Fair, getting the pens set up and taking care of the alpacas and even modeled some clothing made from Alpaca fur. He wanted to bring every animal home with him whether it be turtles, gerbils, rabbits, birds, cats or dogs. Justin had a love of speed and riding dirt bikes, mini bikes, go carts, 4 wheelers. He even completely built bikes. He loved motor cross sports, NASCAR racing, mud bogs, tractor pulls, getting muddy, riding all the fast rides at the fair, and his favorite – the Steelers football team. He is survived by his custodial grandparents, Earl Rose (Jewel Berry); his paternal grandmother, Frances Bland; his maternal grandparents Tina and Stanley Pilkerton; his mother, Tabitha Fitzgerald; his sister, Ajahlin Rose Ayers; his brother, Brandon Hall; his aunts, Julia Barrett (Jason) and Anita Coakley (David); his cousins, Amber Warren, David Coakley, Jr., Matthew Warren, Brianna Coakley, and Levi and Jace Barrett, and his beloved pet beagle, Peanut. Justin was preceded in death by his father, Earl D. Rose, Jr. and his PopPop, David Bland. The family will receive friends from 11:00 am to 1:00 pm on Saturday, August 28, 2021 at Found and Sons Funeral Chapels, 10719 Courthouse Rd, Fredericksburg, where a funeral service will begin at 1:00 pm. Interment will follow in Sunset Memorial Gardens. The family invites friends and family to a reception following the burial at the Pavilion of the Spotsylvania Eagles #4391, 5100 Jake McWhirt Lane, Fredericksburg, Va. 22408. If you would like to bring a dish or to help with the reception, please contact Beverly Lee Karras 540-735-5018. The family asks that everyone wear Justin’s favorite color – blue. In lieu of flowers, donations may be made to the Ronald McDonald House of Richmond at rmhc.richmond.org/donate

Justin Rose, 18 of Stafford, gained his Angel wings on August 17th, 2021 at VCU Hospital in Richmond, Va. He fought a long and courageous battle against Leukemia, but due to complications of Crohn's and Aplastic Anemia brought on by the chemo... View Obituary & Service Information

The family of Justin Rose created this Life Tributes page to make it easy to share your memories.

Justin Rose, 18 of Stafford, gained his Angel wings on August...

Send flowers to the Rose family.