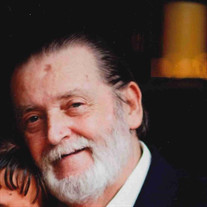 James (Buddy) Herbert Scott, Jr., 85, of Culpeper, died Tuesday, December 7, 2021 at Novant Health Systems UVA Culpeper Hospital. He was born August 19, 1936 in Culpeper to the late James Herbert Scott and Ida Clarice Dennis, and was the youngest of five children. Mr. Scott was a local small business owner. After working for the Culpeper Star Exponent for many years, running the newspaper printing presses, as well as managing the print shop, he founded Piedmont Printing in Culpeper, VA, in 1979 until he retired in 1998. He provided a place for friendly chats, business cards, and work for those who may have needed it, particularly disadvantaged women. Those who know him will remember how much loved horseracing at Charlestown and the idea of playing all of those complicated race conditions against one another, as well as, his purchase of corporate junk bonds that somehow paid off, including most recently, bonds from Hertz Rental Car in bankruptcy. Mr. Scott is survived by his second wife Josephine Saga Scott and five children: son, Willis Jeffery Scott and his wife Nancy of Yorktown, VA; daughter, Cheryl Ann Oscar of Norfolk, VA; son, James Marvin Scott of Weatherford, Texas; daughter, Elizabeth Jane Sangine and her husband Evan of Reston, VA; and son, John Ryan Scott of Culpeper, VA. He is survived by eight grandchildren, Christina Elizabeth Scott Cabrera and husband Marcelo of Charlottesville, VA, Meghan Roberta Scott Graul and husband Lance of College Station, TX, Westin Scott of Weatherford, TX, Samantha Ann Scott of Yorktown, VA, Tristan Scott of Weatherford, TX, Luke Evan Sangine of Reston, VA, Brooke Elizabeth Sangine of Reston, VA and Dyna Oscar-Exilhomme and husband Nerva, currently stationed in South Korea with the US Army, and many other nieces, nephews, and cousins. In addition to his parents, he was preceded in death by his wife, Roberta Jane Lucas Scott, and four sisters, Evelyn Singleton, Hazel Shipe, Mary Francis Creel, and Patricia Corbin. The family would like to thank Novant Health Systems UVA Culpeper Hospital for their care during his last few days. The family will receive friends Monday, December 13, 2021, from 11:00 a.m. to 12:00 p.m. at Found and Sons Chapel, 850 Sperryville Pike Culpeper, VA. A funeral service will follow immediately at 12:00 p.m. with Pastor Randy Albritton officiating. The family would like to invite those unable to attend to join the service via live stream at https://view.oneroomstreaming.com/authorise.php?k=1639007378152776 Interment will follow in Fairview Cemetery. Pallbearers will be: nephews, Billy Ross Singleton and William Reese, III; sons, Willis, James, and John Scott; grandson, Luke Sangine, and great nephews, William Reese, IV, and Christopher Reese. An online guestbook and tribute wall are available at www.foundandsons.com. Found and Sons Funeral Chapel in Culpeper is serving the family.

The family of James Herbert Scott Jr. created this Life Tributes page to make it easy to share your memories.

Send flowers to the Scott family.