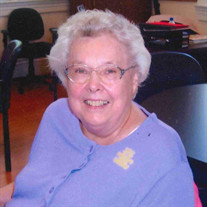 Edna Viola Brown Settle, 91, of White Plains, Maryland, died Tuesday, March 16, 2021 at UM Laurel Regional Hospital. She was born May 6, 1929 in Lignum, Virginia to the late Paul Lee Brown and Grace Truma Brown. She is survived by her five... View Obituary & Service Information

The family of Edna Viola Settle created this Life Tributes page to make it easy to share your memories.

Send flowers to the Settle family.