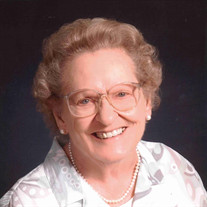 Doris Larson Brandt, 94, of Culpeper, passed away Saturday, March 12, 2022, at UVA Health Systems Culpeper Hospital after a long illness. She was born August 14, 1927 in Brooklyn, New York to the late Esther Larson and Julin Blomgren. Doris worked as an executive secretary at CBS Broadcasting in Manhattan in the early days of television. She and Fred moved to Culpeper in 1960 where she was an active member of St. Luke’s Lutheran Church for over sixty years. She was involved in the community as a Girl Scout leader, a local reading group and theater productions including the Pink Ladies Follies. She is survived by two daughters, Barbara Brandt of The United Kingdom and Elizabeth Berry (Matthew) of Culpeper; son Rick Brandt of Richmond; grandson, Frederick Berry (Nicole). Additional survivors include many nieces and nephews including Mark Miller and Diddi Azhar to whom she was especially close; brother-in-law, Gerald Brandt (Kathy); much loved caregiver, Lisa Culver and a host of extended family and friends. In addition to her parents, Doris is preceded in death by her husband, Frederick Walter Brandt; siblings, Asta Miller (Paul), Leonard Larson (Phyllis); two brothers and three sisters in Sweden including Mai Britt Lundgren, who she was thrilled to meet in 2013. A visitation will be held Thursday, March 17, 2022 from 6 p.m. to 8 p.m. at Found and Sons Funeral Chapel, 850 Sperryville Pike, Culpeper, VA 22701. A funeral service will be held on Friday, March 18, 2022 at 1:00 p.m. at St. Luke’s Lutheran Church, 1200 Old Rixeyville Road, Culpeper with Pastor Jessica Darty officiating. Interment at Culpeper National Cemetery will be private. In lieu of flowers, donations may be made to St. Luke’s Lutheran Church in Doris’s name. An online guestbook and tribute wall are available at www.foundandsons.com Found and Sons Funeral Chapel of Culpeper is serving the family.

The family of Doris Larson Brandt created this Life Tributes page to make it easy to share your memories.

Send flowers to the Brandt family.