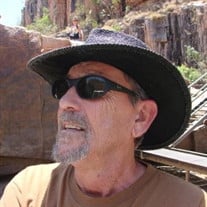 Charles “Chuck” Harbeson, 71, of Corydon, Indiana passed away Friday, December 11, 2020 in the home of his daughter in Remington, Virginia. He was surrounded by love with his wife and daughter at his side. His son was granted compassionate leave from the U.S. Army and repatriated from Iraq so they could spend time together in Chuck’s final days. Chuck was born on August 9, 1949, one of seven siblings. He grew up in Crandall, Indiana of very humble beginnings. He served honorably in the United States Army from 1967 to 1970 and is a veteran of the Vietnam War. He moved to Virginia soon after his return from Vietnam where he met his Wife, Dominique. Chuck owned a successful construction company in northern Virginia for many years. After a work accident, Chuck and his wife moved to Belgium which became “home base” as they traveled the world. Chuck and Dom lived in Nigeria, Papua New Guinea, and Lesotho and traveled throughout their time abroad to destinations most people can only dream of visiting. Chuck recently returned to the United States and moved in with his daughter in Remington, Virginia to begin the renovations on his retirement home and was looking forward to his Wife’s upcoming retirement. Chuck caught up with old friends, Hal and John, and loved to play golf with them as much as he could. Chuck leaves behind by his Wife of 42 years, Dominique; his children, Jessica Foster (Brett) and Joshua Harbeson (Tonya); his four grandchildren: Zoey, Bailey, Brady, and Tessa; his three sisters Carolyn Oliver (Roberall), Sharon Rhoads (Larry), and Barbara Natcher; his brother, Jeff Harbeson; his sister-in-law, Brigitte Weicker; and a host of nieces, nephews, extended family, and friends. He is preceded in death by his sister, MaryAnne and brother, Gary. The family will hold a service on December 21, 2020 at 10:30 a.m. at Quantico National Cemetery, 18424 Joplin Road, Triangle, Virginia 22172. Guests are asked to arrive at 10:00 a.m. Once entering the gates of the cemetery, turn right and line up in LANE D. The ceremony will be live-streamed on Zoom for friends and family. An online guestbook and tribute wall are available at www.foundandsons.com. Found and Sons Funeral Chapel of Culpeper is serving the family.

Charles &#8220;Chuck&#8221; Harbeson, 71, of Corydon, Indiana passed away Friday, December 11, 2020 in the home of his daughter in Remington, Virginia. He was surrounded by love with his wife and daughter at his side. His son was granted compassionate... View Obituary & Service Information

The family of Charles Richard Harbeson created this Life Tributes page to make it easy to share your memories.

Send flowers to the Harbeson family.