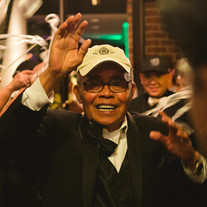 Celso Batingal Patac, Sr. was born to the late Marcelo and Petra Patac in Davao, Philippines on April 6, 1937. He was the eldest of his siblings, Crispina, Arsenia, Juana, Raymunda, Prudenciano, Cipriano, and Lucila. He moved to Rosario, Cavite at the age of 19 to work with the late Demetrio Ibañez where he met his beloved wife, Imelda. In 1959, at the age of 22, Celso took a leap of faith and joined the United States Navy to give his family a better life. He was deployed for long periods of time, having the opportunity to see the world. Being stationed in different countries and cities, his family grew starting in Guam, New York City, Rhode Island, Florida, and Virginia. He retired from the U.S. Navy in 1981, proudly serving the country for 22 years. In 1982, Celso joined the Merchant Marines. Upon his retirement, he took his family back to the Philippines before returning to America in 1990. Celso rejoined the workforce to work for the United States Secret Service for 11 years. As a servant of his Lord and Savior, he devoted his life to serving his country, community, and most importantly his family. He served as a lay-minister, taught CCD and RCIA courses at Holy Family Church (Woodbridge, VA) and Precious Blood Catholic Church (Culpeper, VA). Celso was also a faithful leader and member of the Legion of Mary. Celso is survived by his wife of 58 years, Imelda, three children and ten grandchildren, Dennis & Bernadette (Andrew & Athina, Christian, Julian, Brendan), Eleanor & David (Jeanelle, AJ, Jordan, Tina), Celso “Noy” Jr. (Kevin, Kyle, Kohlin), and two great grandchildren, Penelope and Timoteo, brother-in-law’s, sister-in-law’s, nieces, nephews, and friends around the world. He peacefully transitioned in his home on January 7, 2022 with his loved ones by his side. We honor him today for the foundation he built for his family, his unwavering faith, his faith-filled prayers, and his servant heart to fulfill the Lord’s work. Without his sacrifice, his generosity, and pure kindness, our families would not be here today. Papa Celso will be truly missed and we will remember him forever. A visitation will be held on Saturday, January 15, 2022 from 4 pm to 6 pm and on Sunday, January 16, 2022 from 1 pm to 4 pm with a wake service starting at 3:45pm at Found and Sons Funeral Chapel, 850 Sperryville Pike, Culpeper. If unable to attend either visitation, you can join livestream at (Saturday) https://view.oneroomstreaming.com/authorise.php?k=1641938315159038 (Sunday) https://view.oneroomstreaming.com/authorise.php?k=1641938457159039 A Mass of Christian Burial will be held on Tuesday, January 18, 2022 at 10 am at Precious Blood Catholic Church, 114 E. Edmondson St., Culpeper with Fr. Kevin Walsh officiating. Interment will follow at Culpeper National Cemetery (old section) with honors provided by the Culpeper VFW Post 2524 and the US Navy. An online guestbook and tribute wall are available at www.foundandsons.com. Found and Sons Funeral Chapel of Culpeper is handling the arrangements.

Celso Batingal Patac, Sr. was born to the late Marcelo and Petra Patac in Davao, Philippines on April 6, 1937. He was the eldest of his siblings, Crispina, Arsenia, Juana, Raymunda, Prudenciano, Cipriano, and Lucila. He moved to Rosario, Cavite... View Obituary & Service Information

The family of Celso Batingal Patac created this Life Tributes page to make it easy to share your memories.

Celso Batingal Patac, Sr. was born to the late Marcelo and Petra...

Send flowers to the Patac family.