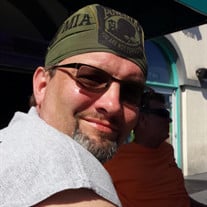 Bruce Edward Courtney died unexpectedly on April 27, 2022 at the age of 53 years old in his home in Fredericksburg, Virginia. Bruce is survived by his wife of nine years, Christine Capelli Courtney; bonus children, Courtney Nave, Connor Nave, and Robert Nave Jr.; mother, Mary Jane Lee; siblings, Brian (Michelle) Courtney, and Laurie (Jimmy) Frazier; niece, Delaney Frazier; nephews, Cameron (Shelby) Courtney, Jackson Frazier, and Easton Frazier; great niece, Kayleigh Courtney; and bonus granddaughter, Zoey Nave. He was preceded in death by his daughter, Eleanor Hamilton Courtney; and his father, Michael E. Courtney. Bruce Courtney along with his twin Brian Courtney were born on December 5, 1968 in Fredericksburg, Virginia to their parents Michael E Courtney and Mary Jane Lee. He graduated from Orange County High School in the Class of 1987. Following graduation, he served as an auto and diesel technician. In 2009 after many years, he reunited with Christine Courtney and on September 23, 2012, they were married. Bruce and his twin brother Brian enjoyed riding motorcycles and went on many trips to Sturgis, as well as rides to the mountains and other beautiful places. In recent years he and Christine were known as the Punkbitches and went on many bike trips with friends and family. Bruce loved music and he loved to hear it loud, especially his favorite band KISS. He also loved NHRA drag racing and Ford Mustangs. Bruce loved his family to include his extended group of friends, framily. He was always ready to lend a hand to anyone in need, friend, family or stranger. He had a big heart for kids and animals. His baby blue eyed boy Cooper was always by his side, in his arms or following him around the house. Bruce touched the lives of everyone he met. He had a big heart and was always ready to lend a hand. He will be forever missed by everyone who met and loved him. Bruce’s family will receive friends from 3:00-4:00 p.m. Thursday, May 5, 2022 at Found and Sons Funeral Chapel, 10719 Courthouse Road, Fredericksburg. A memorial service will follow at 4:00 p.m. in the funeral home chapel.

The family of Bruce Edward Courtney created this Life Tributes page to make it easy to share your memories.

Send flowers to the Courtney family.