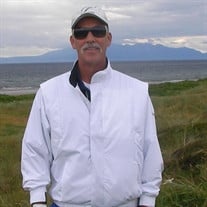 William Joseph “Bill” Lavoie, 69 of Spotsylvania, VA passed away on January 17, 2022, at Spotsylvania Regional Medical Center. Bill was born in Santa Ana, CA to the late Edward Joseph and Rose Maxine Clouse Lavoie on January 1, 1953, both were members of the U.S. Marine Corp. He grew up with his brother Tom and sisters Mary and Claire. Bill loved football and was a star player at Stafford High school. Shortly after graduating high school, he met the love of his life, Susan Bailey, in Fredericksburg, VA where they were married in 1974. He then began to pursue his career and love of the construction industry and began working for his father-in-law in site development. In 1989, he started Curbmasters & Concrete Inc. and it ‘cemented’ his passion for the industry and he garnered the respect of everyone he worked with due to his drive and determination. Bill was always the type of person to get the job done and his hard work ethic is what inspired those around him. He could be a bit stern, but his bulldog mentality served him well, and those around him. He loved his family and adored his two grandchildren, and there is nothing he wouldn’t do to help those he cared about. He loved the game of golf and would spend as much time as he could on the course. Bill was a caring husband, father, brother, PaPa and friend. He leaves behind to cherish his memory his wife of 47 years Susan Bailey Lavoie, son Will Lavoie Jr., his wife Lauren, grandchildren Wesley and Audrey, sisters Claire Hammond and her husband Tom and Mary Triplet and her husband Dale, brother Tom Lavoie and his wife Sara, mother-in-law Sue Pauling, father-in-law Jack Bailey Sr and his wife Mary, brothers-in-law Jack Bailey III and his wife Sherry and Joe Bailey and his wife Nancy, sister-in-law Jackie Park and her husband David, Lynn Bailey, Angie Acors Hall and Ashley Bailey Stokes, and numerous nieces and nephews. He was preceded in death by his parents Ed and Maxine and infant daughter Rebecca. Funeral Services will be private with burial at Oak Hill Cemetery. Arrangements are being handled by Found and Sons in Spotsylvania with a Memorial Service to be held at a later date. Condolences may be shared with family online at foundandsons.com.

The family of William Joseph Lavoie Sr. created this Life Tributes page to make it easy to share your memories.

Send flowers to the Lavoie family.