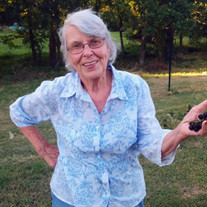 Caring nurse, intrepid code-cracker, hard-working farmwife, faithful Christ-follower, and most of all, devoted and beloved wife, mother, grandmother and great-grandmother, the extraordinary Shirley Gertrude Edgecomb Hopkins went home to be with her Lord October 15. Born in Beverly, Massachusetts January 24, 1928, as the fourth child of Mark and Mary Edgecomb -- and the first in her family to be born in a hospital -- Shirley grew up in Manchester, now known as Manchester-by-the-Sea. Valedictorian of her class, she went on to receive her nursing degree from, and work at, Boston Children's Hospital, where she met George McArthur Jr., a Harvard student who had come in for care. They married and subsequently moved to New York City where Shirley practiced nursing alongside her sister May. After relocating first to Monterey, California and then Maryland, Shirley’s career took a surprise turn, as she demonstrated her keen intellect and served her country at the National Security Agency as a Cold War code-cracker. After divorcing, she married her neighbor, the widowed James "Jim" Hopkins, and gained a daughter, Denise to join her two sons George and Stuart McArthur. In 1977, the couple made another dramatic and rewarding life change and purchased a farm in Orange County, Virginia, where she worked tirelessly at Jim's side for more than 30 years raising pigs, cattle, rabbits and mushrooms. Shirley’s razor-sharp mind, multiple talents, bottomless generosity and depth of devotion to others further played out across diverse interests -- the fruits of which were joyously shared with family and friends. These avocations spanned wide-ranging reading, delectable cooking and baking, challenging crossword puzzles, expert crafting (including sewing and pottery), and colorful floristry to bounteous gardening and most of all, many years of service as a member of Orange County Presbyterian Church, including in the church's governing body, the Session, and the Presbyterian Women's Group. Preceded in death by her adored Jim and treasured siblings Florence, May, Margie and Albert, Shirley is deeply mourned by her children George (Rosie), Stuart (Reyna) and Denise (Russell Strickland) as well as grandchildren George (Christina) McArthur IV, Stephanie (Robert) Meyer, Shirlina (Ben) Mann, Katherine (William) Chavis, Cindy McArthur, Nathan, Benjamin and Jessie Kuhlman, Alison (Sam) Kuhlman-Myers and Mollie (Ryan) Kuhlman-Sieler, as well as 15 great-grandchildren. A Celebration of Life service for Shirley will be held on Thursday, October 28th at 11:00 a.m. at Found and Sons Funeral Home at 850 Sperryville Pike, Culpeper, VA 22701.

The family of Shirley Edgecomb Hopkins created this Life Tributes page to make it easy to share your memories.

Send flowers to the Hopkins family.