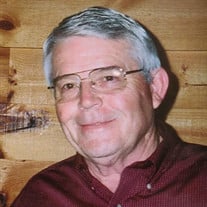 Ronnie Clifton Plaster, 78 years old, went to his heavenly home on February 3, 2022. Just like he dealt with all experiences in life, Ronnie managed his illness with prayer, strength, and grace. He spent as much time with his loved ones as possible, and on his final days he was surrounded at home by his children and grandchildren, who he adored more than anything else in the world. Ronnie was born in Richland, Virginia and was the son of Clifton and Gladys Cordle Plaster. He graduated from Honaker High School in 1961. He also graduated from Newport News Ship Building Apprentice School in 1967. Ronnie was an inventor and in 1978 he developed an automatic coal car coupler. On November 11, 1980, the United States Patent and Trademark Office granted him a patent. Ronnie retired in 2006 from Ross Industries in Midland, Virginia. He served as deacon and Sunday school teacher for 38 years at Mount Lebanon Baptist Church. He spent his retirement years passionately trimming and pruning his grape vines and fruit trees. He enjoyed tinkering on anything and everything he could get his hands on. He also enjoyed working along with his wife out in the yard just as much as he enjoyed working side by side with his son Seth building furniture. When he’d finally come in the house to rest it was to eat a home cooked meal, study for his next Sunday School lesson, or watch the services that his son Brian helped produce for The Bible Chapel Pittsburgh. He is survived by his wife, of 57 years, Earlene Musick Plaster, his oldest son Brian Clifton Plaster, his wife Kim and their two children, Connor and Addison Plaster of Pittsburgh, Pennsylvania; his youngest son Seth Daniel Plaster, his wife Shelly and their four children Sarah Beth, Anna Belle, Amelia Kay, and Alistair Lockhart Plaster of Culpeper, Virginia. Ronnie is also survived by his siblings, Jimmy ‘Sonny’ Plaster and his wife Betsy of Raven, VA; John Plaster of Lewisburg, WV; Jackie Plaster and his wife Arlene of Rosedale, VA; Dickie Plaster and his wife Donna of Cedar Bluff, VA; Patricia Bailey and her husband James of Cedar Bluff, VA; and Gary Plaster and his wife Delana of Cedar Bluff, VA. He is preceded in death by his parents Clifton and Gladys Cordle Plaster and sisters Phyllis Jean Warner, Sandra Colley, and Donna Miller. The Plaster family will receive friends Tuesday, February 8, 2022 from 6:00 pm until 8:00 pm at Found and Sons Funeral Chapel, 850 Sperryville Pike, Culpeper, VA 22701. Funeral services for Ronnie Clifton Plaster will be conducted at 11:00 on Wednesday, February 9, 2022 at Mount Lebanon Baptist Church, Boston, VA with Pastor Steve Harrelson, Rev. Tom Wiles, and Rev. Dickie Plaster officiating. Interment will follow in Fairview Cemetery, Culpeper, VA. An online guestbook and tribute wall are available at www.foundandsons.com Found and Sons Funeral Chapel of Culpeper is serving the family.

Ronnie Clifton Plaster, 78 years old, went to his heavenly home on February 3, 2022. Just like he dealt with all experiences in life, Ronnie managed his illness with prayer, strength, and grace. He spent as much time with his loved ones as... View Obituary & Service Information

The family of Ronnie Clifton Plaster created this Life Tributes page to make it easy to share your memories.

Send flowers to the Plaster family.