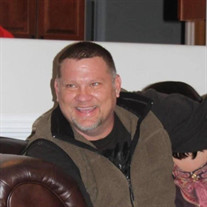 Robert John “Robbie” Miller, Jr., 49, of Culpeper, passed away on Monday, February 7, 2022 at Mary Washington Hospital. Robbie was born on January 3, 1973 to LaDonna “Sue” Miller and the late Robert J. Miller Sr. Robbie was an avid Redskins fan. He loved to hunt and fish. Robbie was a family man who loved his wife and family dearly. His daughter, Alyssa, was the apple of his eye. He is survived by his wife of 15 years, Christy Bowers Miller; his mother, LaDonna “Sue” Miller; his daughters, Alyssa and Faith Miller; his brother, Stevie Miller; his sister, Noel Brooks (Mark); his parents-in-law, Lacy and Debbie Timbers; his sisters-in-law, Carrie Gallahan (Lee) and Mary Ellen Bowers; and a host of nieces, nephews, and other relatives and friends. In addition to his father, he was preceded in death by his brother-in-law, Jeff Bowers. A funeral service will be held at 12:00 p.m. on Monday, February 14, 2022 at Found and Sons Funeral Chapel, 850 Sperryville Pike, Culpeper with Pastor Kevin Dawson officiating. The family will receive friends one hour prior to the service. Interment will follow in Fairview Cemetery. Pallbearers will be Lacy Timbers, Jeffrey Bowers, Jr., Lee Gallahan, Luke Beaty, Ricky Jenkins, and Allen Bowers. Found and Sons of Culpeper is serving the family.

The family of Robert John "Robbie" Miller Jr. created this Life Tributes page to make it easy to share your memories.

Send flowers to the Miller family.