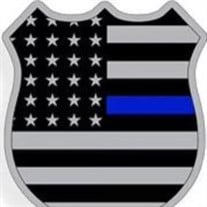 R. Wayne Inabinet, 61, of Spotsylvania, passed away unexpectedly on August 8, 2021 at his home. Wayne was born in Savannah, Georgia to Barbara and Hubert Inabinet. He graduated high school in St. Matthews, SC. Wayne attended and graduated from Orangeburg Technical College. While he was in college, he met the love of his life, Sophia. He started his career in law enforcement while living in Orangeburg, SC. Wayne and Sophia were married in 1981, and shortly thereafter, they moved to Virginia. He then began a 26-year career with Fairfax County Police Department, serving the community in many capacities. He received numerous awards for his dedication and service. Wayne was a proud mentor to many young police officers and enjoyed assisting others in their careers. He served in many capacities with Fairfax County Police Department - detective, patrol officer, helicopter unit, and instructor. Wayne retired as 1st Lieutenant from Fairfax County, and moved to Spotsylvania. In Spotsylvania, he served as Assistant Director for the Rappahannock Regional Criminal Justice Academy for six years. Here he continued his love for helping others advance their careers and learn about law enforcement. He would do anything for anyone if they needed help. Wayne would give you the shirt off his back or the last dollar in his pocket without any recognition needed for his giving nature. If he couldn’t give to someone in a financial manner, he would donate his time to anyone that needed help. Neighbors, friends and family all benefited from his giving heart and generosity. Wayne is survived by his wife and best friend, Sophia; his children, Derek, and his wife, Julia Inabinet; Greg, and his wife; Jamie Inabinet, and Aaron Inabinet, and his wife, Tierney Inabinet, his mother, Barbara Inabinet; his 2 siblings, Bert Inabinet, and Angie Bailey and her husband, Craig; six grandchildren, James, Trista, Ashton, Jacob, Blake and Bailey, and numerous nephews and nieces, and other loving extended family and friends. He was preceded in death by his father, Hubert. The family will receive friends from 2:00 to 3:30 p.m. Friday, August 13, 2021 at Found and Sons Funeral Chapel, 10719 Courthouse Road, Fredericksburg. A celebration of life will begin at 3:30 p.m. in the funeral home chapel. Live-streaming will be available for those who are unable to attend in person. In lieu of flowers, the family requests that donations be made to the Virginia law Enforcement Assistance Program (VALEAP) via http://valeap.org/?page_id=163 As he would say, “Goodnight family.”

R. Wayne Inabinet, 61, of Spotsylvania, passed away unexpectedly on August 8, 2021 at his home. Wayne was born in Savannah, Georgia to Barbara and Hubert Inabinet. He graduated high school in St. Matthews, SC. Wayne attended and graduated... View Obituary & Service Information

The family of Robert Wayne Inabinet created this Life Tributes page to make it easy to share your memories.

Send flowers to the Inabinet family.