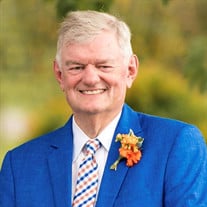 Not sure what to send?

Robert H. Deaderick, Jr., proud son, father, grandfather, husband, attorney, sportsman, and patriot, passed away peacefully in the early morning hours on May 10 at his home in Fredericksburg at the age of 78. The son of a World War II hero, "Bob" was born in Harrisonburg, VA on October 9, 1943, and first met his father at the age of two. The oldest of four children to Robert H. Deaderick and Jane (Argenbright) Deaderick, he played football at Manchester High School in Richmond, VA as a white tee, buzzcut American teenager with a baseball card collection, a morning paper route, and a homemade go-kart. He revered his father, and chose his namesake's alma mater, Virginia Military Institute, for college. Upon graduating VMI Class of 1965, he joined the U.S. Army's Armor Division and became Captain, narrowly avoiding Vietnam in favor of Germany and a Spitfire convertible. While serving overseas, he discovered a penchant for debate and followed that inspiration to law school at Washington & Lee University, kickstarting a successful career as an attorney that spanned nearly five decades and included State Bar memberships in New York, Massachusetts, and Virginia, as well as the Supreme Court Bar. An exceptional arbiter, he delivered winning arguments in the most hopeless scenarios, successfully defending Nixon-era potheads to illegitimate fantasy football trades, but was best known as a public defender who could leverage big settlements from stingy insurers. In 1980, Bob married Marian Patricia Walsh in New York, NY, and soon had two children, Robert III and Elizabeth. His perpetual love of Virginia led him to settle in Fredericksburg in 1990, where he began a long stretch as a single father with both children under his wing. In 1998, Bob married Mary Caroline Hatch and was blessed with a second son, David. Bob made fatherhood his mission, dedicating himself completely to his family, and his parenting was second to none: loving, yet demanding; adventurous, but strict. His limited spare time in Fredericksburg was directed to service and community organizations, including roles as President of the local VMI Alumni Association chapter, President of the Rappahannock Rotary Club, Chairman of Healthy Generations RAAI, District Chairman of Boy Scouts of America, and Board of Directors at the Moss Free Clinic. Sunday mornings were spent at The Fredericksburg Presbyterian Church. Saturdays, on the other hand, featured his two personal joys: VMI Football and the Potomac River. In the fall, he'd be in Keydet red and yellow, team depth chart in hand, chanting "The Spirit" along with the Corps, eager to shake hands with his personally recruited players after the game. On the Potomac, "Riverbank" saw Bob and his family every summer of his life, sharing in classic southern thrills like fishing, hunting, and sailing, even becoming a beekeeper in later years. Bob is survived by his wife Caroline; his children Robert III (Becky), Elizabeth (Jeffrey) Tubbs, and David; his sisters Sally (Gary) Thompson and Diane (Lanny) Montgomery-Logan; his brother Doug Deaderick; his grandchildren Huck and Nettie (Elizabeth), and Robert IV (Robert); and countless extended family members, close at heart and forever blessed. He was a man of principle, perpetual reverence, and sacrifice, a master of ceremony, a champion for his children, a statesman and a servant, certain to meet the Lord with a firm handshake and a smile. A memorial service open to the public will be held on Saturday, May 21, 2022 at 11:30 am EST at The Fredericksburg Presbyterian Church, 810 Princess Anne Street, Fredericksburg VA, with a reception to follow. In lieu of flowers, gifts may be made to the VMI Foundation.

Robert H. Deaderick, Jr., proud son, father, grandfather, husband, attorney, sportsman, and patriot, passed away peacefully in the early morning hours on May 10 at his home in Fredericksburg at the age of 78. The son of a World War II hero,... View Obituary & Service Information

The family of Robert H. Deaderick Jr. created this Life Tributes page to make it easy to share your memories.