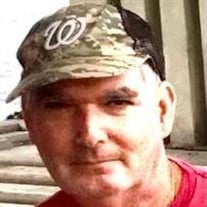 Robert “Bob” Noah Crosen, Jr., 61, surrendered his life to his Lord on July 26, 2021 at his home after a long and courageous fight with cancer. He was surrounded by his loving family and friends. Bob was born in Washington DC, raised in Maryland and lived his adult years in the Fredericksburg area. He was a devoted husband to his childhood sweetheart, Julie May Thomas Crosen. They had 41 years of marriage to celebrate their love. Bob’s love of family would be highlighted by his daughter Janice, in whom he was so proud. As a nurse, she became a pivotal part of his care. Bob and his grandchild, Jason, spent entire days taking apart Jason’s dirt bike and rebuilding it. They also spent many hours on Jason’s bass boat fishing at Lake Anna. His grandson was the light of Bob’s life and his biggest disappointment was not being able to watch him grow into adulthood. Bob and Julie enjoyed travelling to beaches and warm climates by cruise or land as well as family vacations with his siblings and families. Bob’s charismatic personality and wry sense of humor made him a favorite person to be around. Bob made his living in utilities construction, inspection and management and set a standard for others in his work. He worked with W.C. Spratt, the Virginia Department of Transportation and, for the ten years prior to retirement, for the City of Fredericksburg. At the time of his retirement, he was responsible, as Superintendent of Public Works, for field operations for the City. Bob made many lasting friendships with those who consider themselves honored to have labored beside him. Bob is survived by his mother, Carolyn Louise Creegan Crosen; his wife, Julie Crosen; daughter, Janice Alaina Crosen Childs (Jamie); grandson, Jason Riley Childs; sister, Kathleen Marie Crosen Sterne (Charles); brother, William Larry Crosen (Robin); nieces and nephews, Ashley Marie Templin (Jacob), Charles Michael Sterne, Christopher Allen Crosen, Mark Steven Crosen (Kailey), Amelia Louise Templin, and Maxton Dean William Crosen; friends, Doug Fawcett (Greta) and Nancy Poulliot, and a host of cousins. Bob was preceded in death by his father, Robert Noah Crosen Sr. A Celebration of Life will be held from 1:00 p.m. to 4:00 p.m. on Saturday, July 31, 2021 at 55 Beagle Rd, Falmouth. Food will be served and the family requests you dress casually. In lieu of flowers, those who would like to make a contribution in memory of Bob may do so to the Colon Cancer Foundation (coloncancerfoundation.org) or to Mary Washington Hospice, 2300 Fall Hill Ave. #401B, Fredericksburg, VA 22401. Condolences may be shared with his family online at foundandsons.com.

Robert &#8220;Bob&#8221; Noah Crosen, Jr., 61, surrendered his life to his Lord on July 26, 2021 at his home after a long and courageous fight with cancer. He was surrounded by his loving family and friends. Bob was born in Washington DC,... View Obituary & Service Information

The family of Robert "Bob" Crosen Jr created this Life Tributes page to make it easy to share your memories.

Send flowers to the Crosen family.