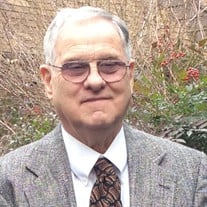 Raymond Leonard Peters, 79, was reunited with his heavenly family on March 31, 2022 at Henrico Doctors Hospital, Richmond, VA. Raymond was born July 17, 1942 in Scott County, VA. In 1946, his family and six siblings moved to Culpeper. As a child, Raymond suffered cognitive damage from an excessive fever caused by the German Measles. Any intellectual disabilities were more than compensated for by his caring and inquisitive personality and unwavering belief in the Bible and God. To say Raymond was friendly and personable would be an understatement. Raymond attended Richmond Barber School in Richmond, VA. Afterwards, he returned to the family’s farm where he assumed primary responsibility for the dairy operations. After the farm was sold, Raymond lived in town with his brother, Frank and his wife, Barbara. He enjoyed interacting with members of the community and doing miscellaneous lawn work. For the past several years, Raymond lived in Richmond with his sister, Mary. He was known as “Uncle Raymond.” He was an active and beloved member of Westhampton United Methodist Church where he enjoyed a caring and attentive relationship with his minister, Christy Turner. Summer vacation with his nephew, Stephen (Amanda) at the beach became a tradition. Raymond loved seeing new sights and traveling throughout the country and Mexico. He referred to the Grand Canyon as a “really big hole.” Raymond loved the slot machines in Las Vegas, the sights at Disney World and New York. He particularly enjoyed his annual front-row attendance at the Barnum and Bailey Circus. Raymond was preceded in death by, his father, Robert Leonard Peters; his mother, Ethel Mae Peters; his step brother, Palmer Gillenwater; his sister, Evelyn Royer; his brother, Frank Peters; and several beloved niece and nephews. Surviving to cherish and share their precious memories of Raymond are his siblings, Robert E. Peters (Catherine); sister, Helen P. Smith; brother, Morris W. Peters (Carryl); and sister, Mary P. Hawthrone (Charles). He is also survived by 18 adoring nieces and nephews and their children. Raymond’s family wishes to express their appreciation for VCU’s Geriatric House Call medical team’s attentive caring and Dr. Barnett Gibbs, Cardiologist. A very special thank you is extended to Raymond’s CNA, Emily Morris, whose love and caring skills for many months gave Raymond great joy, comfort, and quality of life. The family will receive friends Monday, April 4, 2022 from 6 p.m. to 8 p.m. at Found and Sons Funeral Chapel, 850 Sperryville Pike, Culpeper, VA 22701. A funeral service will be held on Tuesday, April 5, 2022 at 11 a.m. at Found and Sons Funeral Chapel with Andy Wynham officiating. The family would like to invite those unable to attend to watch the service via live stream at https://view.oneroomstreaming.com/authorise.php?k=1649178300176736. Interment will follow at Fairview Cemetery. An online guestbook and tribute wall are available at www.foundandsons.com. Found and Sons Funeral Chapel of Culpeper is serving the family.

Raymond Leonard Peters, 79, was reunited with his heavenly family on March 31, 2022 at Henrico Doctors Hospital, Richmond, VA. Raymond was born July 17, 1942 in Scott County, VA. In 1946, his family and six siblings moved to Culpeper. As a... View Obituary & Service Information

The family of Raymond Leonard Peters created this Life Tributes page to make it easy to share your memories.

Raymond Leonard Peters, 79, was reunited with his heavenly family...

Send flowers to the Peters family.