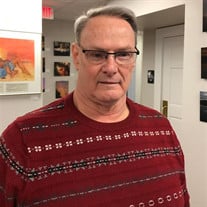 Ray Allen Bishop, 70, of Fredericksburg, Virginia passed away Friday, September 10, 2021 at VCU in Richmond, Virginia of esophageal cancer. He was born in Gerrardstown, West Virginia on December 30, 1950, on his mother's birthday, the fourth of 14 children. Ray spent his youth working on the apple orchard his family lived on, until he got a job with Raub Supply. That job eventually brought him to Fredericksburg, where he spent the majority of his adult life and raised his family. Ray stayed with his company for 50 years through two buyouts, retiring shortly before his death. He was well known in his industry, and beloved by his customers and colleagues. His life was centered around his family, both biological and church. He was an active member of Falmouth Baptist Church, and then later Fredericksburg Baptist Church. At both churches, he was an ever-present figure in the lives of the younger generations, volunteering with the youth groups, chaperoning mission trips, and babysitting in the nurseries. At Fredericksburg Baptist Church, he was also known for his volunteer work with the community suppers on Thursday nights, as well as driving the cold weather shelter bus in the winters. Ray is survived by two children, Anthony Bishop (Cassandra) of Fredericksburg, VA, and Rachel Bishop Fielden (David) of Chesterfield, VA; his four grandchildren, Addison, Natalie, Jackson, and an unborn grandchild due in October; six brothers; six sisters; and numerous nieces, nephews, great-nieces, and great-nephews. He was preceded in death by his parents, Thelma and Jake, who passed away earlier this year; and by his brother, Harold. Ray's family would like to invite all who knew him to a gathering from 6:00-8:00 p.m. Saturday, September 25, 2021 at Found and Sons Funeral Chapel, to reminisce and share stories about his life. In lieu of flowers, please consider sending a monetary donation in his memory to the youth group or Thursday Night Supper Program at Fredericksburg Baptist Church, 1019 Princess Anne Street, Fredericksburg, Virginia 22401.

Ray Allen Bishop, 70, of Fredericksburg, Virginia passed away Friday, September 10, 2021 at VCU in Richmond, Virginia of esophageal cancer. He was born in Gerrardstown, West Virginia on December 30, 1950, on his mother's birthday, the fourth... View Obituary & Service Information

The family of Ray Allen Bishop created this Life Tributes page to make it easy to share your memories.

Send flowers to the Bishop family.