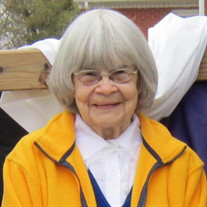 Born in Boston, Virginia on August 24, 1930 to Edgar and Bertha Jenkins, went home to be with JESUS, her Lord and Savior, on Wednesday, July 21, 2021. In addition to her parents, she is pre-deceased by her older sisters, Virginia Hawkins (Robert) and Margaret of Culpeper, VA; her younger brother Ed Jenkins (Linda) of Keeling, VA, as well as her husband, Frederick Jenkins of Culpeper, VA and her son, Roger Lee Jenkins of Remington, VA; her daughter-in-law, Terry Faller Jenkins (Fred ) of Bealeton and her son-in-law, Wayne Fleury of Manassas, VA. She is survived by her daughter, Rachel (Ann) Fleury of Boston, VA; son, Fred Jenkins, Jr. (Bonnie) of Midland, VA; grandson, Fred Jenkins III of Etlan, VA; great-grandson, Bronson (Jenkins) Lamb of Haymarket, VA; her only niece, Jean H. Payne of Culpeper, VA; and a special nephew, Jack Hawkins (Bonnie) of Culpeper, VA. Rachel was a member of Alive Church of the Nazarene in Bristow, VA and was previously a long-time member of Community Tabernacle Assembly of God Church in Front Royal, VA. Her three children were abundantly blessed to be raised by this ‘Woman of God’ and they know they will see her again one day in Heaven. Growing up, Rachel would take chickens to the Boston General Store to trade for flour and sugar and often played in the Hazel River. Rachel always had an ‘adventuresome’ spirit…she once shot a deer from her porch in Kerrville, Texas (and proudly displayed the skeleton head to prove she did it). At age 70, she celebrated her birthday by taking a hot air balloon ride. Asked if she was scared, her reply was ‘No! I’m closer to God up there! An accomplished seamstress, after high school graduation from Culpeper High School, Rachel went to work in the late 1940’s at a factory in Culpeper where she tacked waistbands in soldier’s uniforms. At last count, she had acquired five sewing machines. She designed/made the majority of the clothes she wore, sewed for family and friends, made quilts, vests, and knitted scarves, as well as creating an entire seasonal wardrobe for her constant companion "Clyde" the bear. Anyone who knew Rachel for only a short while, would attest to the fact that she had a ‘fun sense of humor and was truly a ‘kid at heart’ (after all, as she was fond of saying….‘I’m only 90’ ). Although Rachel never had a driver’s license, over her lifetime she lived in three states. In addition to Virginia, she lived for a while in Ft. Pierce, Florida ( where she worked in a grapefruit packing plant ) and in Kerrville, Texas (where she worked in a plant nursery for a time) and she managed to put her feet in both the Atlantic and Pacific Oceans. If you spent even a short amount of time around Rachel, you knew that ‘fried chicken’ was her favorite food. The family has invited everyone to join them after the interment at Hillcrest Memory Gardens, for a meal at Rachel (Ann’s) Fleury’s house in Boston. Family night: Monday, July 26 from 5:00p.m to 7:00p.m. at Found and Sons funeral home. Funeral service: Tuesday, July 27 at 11:00a.m. with Pastor Allen Perdue of Alive Church officiating and Brother Cecil Jones (retired) of Community Tabernacle Assembly of God. The family would like to invite those unable to attend in-person to join the service via live stream at https://view.oneroomstreaming.com/authorise.php?k=1627078197126903 Contributions can be made in honor of Rachel’s life, to Alive Church of the Nazarene to further their mission to ‘Live, Love, Lead’, like Jesus. Can be mailed to: P.O. Box 534, Bristow, VA 20130 An online guestbook and tribute wall are available at www.foundandsons.com Found and Sons Funeral Chapel of Culpeper is serving the family.

Born in Boston, Virginia on August 24, 1930 to Edgar and Bertha Jenkins, went home to be with JESUS, her Lord and Savior, on Wednesday, July 21, 2021. In addition to her parents, she is pre-deceased by her older sisters, Virginia Hawkins (Robert)... View Obituary & Service Information

The family of Rachel Ada Jenkins created this Life Tributes page to make it easy to share your memories.

Send flowers to the Jenkins family.