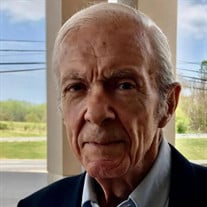 Paul Edward Karnes, 91, of Culpeper, Virginia died, August 20, 2021 at The Harbor at Renaissance of Greene County in Stanardsville, VA. He was born November 12, 1929 in Page, County Virginia to the late James Jackson and Nellie Olivia Coughlin Karnes. Paul was raised by his aunt, Vergie C. Jenkins after his mother died when he was four months old. He retired after a career as postal superintendent at the United States Postal Service. Paul was a veteran of the US Army, serving his country in the Korean War. He went on to serve his community as commander of the VFW Post 2524 as well as serving as past district VFW commander. He was an avid vegetable gardener and enjoyed that immensely. Paul as a man of strong work ethic, loved his family, and was a serving oriented person to both his family and others. Paul is survived by his sons, Jeffrey W. Karnes and William “Billy” G. Karnes (Susan), his grandchildren: Ross Karnes, Aidan Karnes, Paul E. Karnes II, (Kara), Andrew Karnes (Jenny), Anna Peckman (Jonathan), Stephanie Lucas (Adam), Ryan Karnes, Hunter Karnes, Lindsey Koch (Tucker) and 12 great grandchildren, and his very special caregiver Beth Murphy. In addition to his parents, Paul is preceded in death by his wife, Eva Johnston Karnes, his son, Stephen Karnes, his siblings, Robert Karnes (Polly), Mildred Peters (Billy), and Page Karnes (Iris). A visitation will be held on Monday, August 30, 2021 from 6:00 pm until 8:00 pm at Found and Sons Funeral Chapel, 850 Sperryville Pike, Culpeper, Virginia 22701. A funeral service will be held Tuesday, August 31, 2021 at 11:00 am at Found and Sons Funeral Chapel with Pastor Dan Carlton officiating. The family would like to invite those unable to attend to join the service via live stream at https://view.oneroomstreaming.com/authorise.php?k=1629748714132414 Interment will follow in Fairview Cemetery. Pallbearers will be Ryan Karnes, Hunter Karnes, Andy Karnes, Paul Karnes, Aidan Karnes and Adam Lucas. Memorial contributions may be made in Paul’s honor to Alzheimer’s Association, 8180 Greensboro Drive, Suite 400, McLean, VA. 22102. The family would like to express their gratitude to Amber and the staff of The Harbor at Renaissance of Greene County for their kindness and the compassionate care given to our dad. An online guestbook and tribute wall are available at www.foundandsons.com. Found and Sons Funeral Chapel of Culpeper is serving the family.

Paul Edward Karnes, 91, of Culpeper, Virginia died, August 20, 2021 at The Harbor at Renaissance of Greene County in Stanardsville, VA. He was born November 12, 1929 in Page, County Virginia to the late James Jackson and Nellie Olivia Coughlin... View Obituary & Service Information

The family of Paul Edward Karnes created this Life Tributes page to make it easy to share your memories.

Send flowers to the Karnes family.