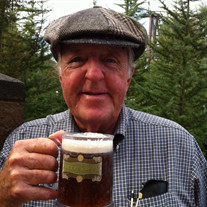 Dr. Paul Louis Dawson of McLean, VA; Culpeper, VA and La Jolla, CA was born on January 29, 1931, in San Diego, California, and died on February 6, 2021 in Culpeper, Virginia. Paul attended St. Augustine’s High School in San Diego. He received a BS and MS in Mechanical Engineering from Stanford and a PhD in military history from George Washington University. Paul loved everything Stanford, everything history, and everything aviation. As Executive Vice President and General Manager of GE, he managed challenging projects: B70 Experimental SST; Jet Engine Designs; Lamp Division US; Carboloy Systems; Tungsten Mine Project; GE Plastics Europe and GE Plastics US. For his work in reducing the plant emissions in the Plastics Division of GE in Holland, he was conferred a Commandeur in de Orde van Oranje-Nassau by Queen Beatrix. Paul retired from GE in 1991. Paul was an avid collector of all things aircraft and military (with a particular interest in World War II). Following his retirement, Paul volunteered as a docent at the Smithsonian Air and Space Museum and the Stephen F. Udvar-Hazy Center in Virginia. He maintained his own personal museum of aircraft and military memorabilia much of which will be donated in his honor to The National World War II Museum in New Orleans, LA. At Stanford, Paul met and married his first wife Jacquelin Begien with whom he had four children: Jennifer Dawson Lawrence of San Diego, CA, Paul “Skip” Dawson of Chicago, IL, Kristin Dawson Wilson of Smith Mountain Lake, VA, and Christopher Dawson of Fairfax, VA. Following the loss of his first wife, Paul found love again and married Kathleen Salay Dawson in 2007. Paul is survived by his wife Kathleen, his four children, five grandchildren, and his sister Sheila Dawson Bertrand of Culpeper, Virginia. Paul will be celebrated at a funeral Mass in San Diego, CA. The family requests that any memorial gifts be made in honor of Paul to the Michael J. Fox Foundation for Parkinson’s Research at https://www.michaeljfox.org/donate or to St. Augustine High School in honor of Paul at https://secure.usaepay.com/interface/epayform/uiL427L8eRnIIFZ8M6nvAaS49pXedKUc/ An online guestbook and tribute wall are available at www.foundandsons.com Found and Sons Funeral Chapel of Culpeper is serving the family.

The family of Paul Louis Dawson created this Life Tributes page to make it easy to share your memories.

Send flowers to the Dawson family.