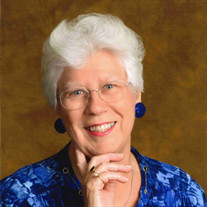 Mary Reale, 78, of Culpeper, VA, died Tuesday, March 1, 2022, at her home peacefully, with her devoted husband, John, by her side. She was born April 3, 1943, in Philadelphia, PA, to the late John and Eva Burger. Mary was a faithful Catholic woman. She was a loving wife and mother, proudly raising four children, and a mentor to many. She was an avid gardener, knitter, and quilter. As an accomplished seamstress, she made her own patterns from an early age. Mary made her own wedding gown and her bridesmaids’ dresses. She lovingly handmade a quilt for each of her grandchildren. Her love was often poured into preparing all natural meals for her family, homemade canning and preserving from her garden. Married life led them to New York, where they began raising their family. After retiring, John and Mary began their adventure of RVing across the country. Along the way, they explored many states, even making their way to Alaska. After their travels, they moved to Arkansas and recently settled in Culpeper, VA. Mary was active in a variety of renewal programs within their church. Being known for her hospitality, she often hosted dinner parties and large gatherings. Mary is survived by her best friend and husband of 56 years, John Reale, Jr., four children: John Reale, III (Cathy), Peter Reale (Heidi), Jennifer Nazak (Jason), and Elizabeth Kelly (Mark), fourteen grandchildren: John Reale, IV, Angelina Reale, Benjamin Reale, Zachary Reale (Emiko Ormsbee), Annemarie Reale, Nathaniel Reale, Lindsay Nazak, Rachel Nazak, Alyvia Nazak, Stephen Kelly, Matthew Kelly, Timothy Kelly, Teresa Kelly, and Colette Kelly, four siblings; Barbara Eves (Jerry), Liz Sharpe (Bob), John Burger (Denise), and Anna Burger (Earl Gohl), as well as beloved nieces and nephews. In addition to her family, she will be missed by a multitude of friends across the country. A visitation will be held from 10:30 to 11:30 a.m. on Monday, March 7, 2022, at Precious Blood Catholic Church, 114 E Edmondson St, Culpeper, VA. A Mass of Christian Burial will follow at 11:30 a.m. with Father Kevin Walsh. Interment will be at a later date in New York. An online guestbook and tribute wall are available at www.foundandsons.com Found and Sons Funeral Chapel of Culpeper is serving the family.

Mary Reale, 78, of Culpeper, VA, died Tuesday, March 1, 2022, at her home peacefully, with her devoted husband, John, by her side. She was born April 3, 1943, in Philadelphia, PA, to the late John and Eva Burger. Mary was a faithful Catholic... View Obituary & Service Information

The family of Mary B. Reale created this Life Tributes page to make it easy to share your memories.

Send flowers to the Reale family.