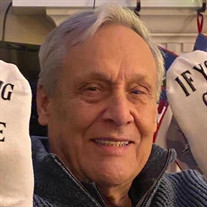 Kenneth Robert Schwenzer, 78, of Culpeper, VA, died Sunday, January 2, 2022. He was born May 16, 1943 in Bronx, NY to the late Arthur and Ethel Schwenzer and grew up in Madison, CT. Kenneth was a loving husband, father and grandfather. He had a strong faith in his Lord and Savior and was looking forward to meeting him. He was a member of Reformation Lutheran Church. In his youth, he was an Eagle Scout and developed a passion for history which he carried through life. He was a Civil War buff and loved tall ships. For most of his career, he was a manufacturing foreman, but later in life was able to fulfill a dream when he became the owner of the New England Dairy Store. Ken was also an active member of AA for 43 years. From the first day he walked through the doors until his last meeting, he shared his life and wisdom with others. Predeceased by his parents and younger brother, Conrad, Kenneth is survived by his loving wife of 54 years, Martha Jane "Marty" Schwenzer, three children; Susan Sunderlin (Mark), Erica Carrano (Robert), and Steven Schwenzer (Carolyn). Also surviving Kenneth are his grandchildren; Robbie and Katie Rose Carrano, Kacey, Ethan, Regan, Evan, Aaron, Avery and Julia Schwenzer, and Robert Sunderlin. Memorial contributions may be made in Kenneth’s honor to ThriVe Women’s Healthcare of Central Virginia, 18484 Crossroad Parkway, Culpeper, VA 22701 or Culpeper Food Closest, P. O. Box 343 Culpeper, VA 22701. Services will be at a later date. An online guestbook and tribute wall are available at www.foundandsons.com Found and Sons Funeral Chapel of Culpeper is serving the family.

Kenneth Robert Schwenzer, 78, of Culpeper, VA, died Sunday, January 2, 2022. He was born May 16, 1943 in Bronx, NY to the late Arthur and Ethel Schwenzer and grew up in Madison, CT. Kenneth was a loving husband, father and grandfather. He... View Obituary & Service Information

The family of Kenneth Robert Schwenzer created this Life Tributes page to make it easy to share your memories.

Send flowers to the Schwenzer family.