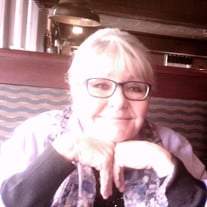 Karen Leigh Henderson, 70, passed away Friday, March 4, 2022, at her residence. She was born October 18, 1951, in Washington, D.C. to the late Landis D. and Patricia Ann Henderson. Karen is a native born singing Washingtonian, that is a well loved entertainer and speaker, whose career spans over four decades. Karen grew up traveling. With her father being a Colonel in the Air Force, she resided in England, Germany, and all over the United States to finally calling home in Washington, Virginia. She made a special appearance on the Mike Douglas Show to speak about her accomplishments. Karen was Washington D.C.’s popular hometown entertainer and WMAL & ABC personality for over four decades. She made annual appearances at the John F. Kennedy Center for the Performing Arts for 12 consecutive Christmas Eves that were broadcast live on WMAL and Armed Forces Radio. Karen’s legendary New Year’s show for the Kennedy Center patrons continued for 18 years until 2012. You could find her when a special event called for “official representation.” She was known affectionately as “the Kate Smith of Washington” because she was an official National Anthem performer at the Washington Redskins’ games. Karen boasted many local honors and performances alongside the nation’s finest performers. She was also the President and Director of the Fauquier County Chamber of Commerce for ten years. Along with those achievements, Karen wrote many books and recorded many albums. Vocalist Karen Henderson’s energetic and melodious style has been showcased nationally on both the Mike Douglas and Merv Griffin Shows and at the Tropicana Hotel in Las Vegas. In the Washington D.C. area, she performed at such great venues as Blues Alley, the Cellar Door, Charlie’s Georgetown, and Anton’s 1201 Club along with several long-running engagements at the major hotels that include the Sheratons Washington and National various Marriotts, Hiltons, and Stouffers Hotels, and numerous private clubs. For four years, Karen appeared at the private Ft. Myer Officer’s Club in Arlington, and performed upon request for both private and publix events. In the Spring/Summer of 1997, Karen’s busy schedule included appearances for the Republican Inaugural Ball; National Space Club/NASA; Goddard Space Center at the Washington Hilton; the National Building Museum; a Hollywood gala at the White Myer House; the Prevention of Blindness Ball at the Four Seasons; at the Friends of the National Zoo’s Zoofari; Nrmy-Navy Country Club; the Shoreham Hotel; University of Virginia; Germanna Community College; Holiday Inn Alexandria; and the Hotel Washington. As featured speaker for many charitable and business organization, Karen incorporated her music and personal philosophy into each presentation. Her first book, Miraclerind: The Wonder of Mind Over Matter was published in 1994. She has since published her second book; Fractured Circle. Karen is survived by her sister, Patrice E. Henderson (Robert Walker) of Annandale, Virginia. A Celebration of Karen’s Life will be held at a later date. An online guestbook and tribute wall are available at www.foundandsons.com Found and Sons Funeral Chapel of Culpeper is serving the family.

Karen Leigh Henderson, 70, passed away Friday, March 4, 2022, at her residence. She was born October 18, 1951, in Washington, D.C. to the late Landis D. and Patricia Ann Henderson. Karen is a native born singing Washingtonian, that is a well... View Obituary & Service Information

The family of Karen Leigh Henderson created this Life Tributes page to make it easy to share your memories.

Send flowers to the Henderson family.