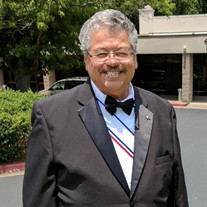 Joseph Daniel “Danny” Barela, beloved father, grandfather, and brother, went to be with the Lord on February 7, 2022. He passed peacefully with his children by his side at Mary Washington Hospital in Fredericksburg, VA. He was born on June 8, 1951, in Santa Fe, NM, to parents Jose E. Barela and Clara I. Vigil of Santa Fe, NM. Joe had numerous interests and talents, especially in music. He played trumpet in the John F. Kennedy High School marching, concert, and jazz bands. He also played trumpet in a local rock band called the Trojan Horse, which performed at numerous venues in California. He later went on to play in the Barstow Community College jazz band and would volunteer to play taps during Veterans Day and Memorial Day services. In April of 1972, he married his high school sweetheart, Darlene, and together they had 5 children. Joe and Darlene were actively involved in the ministries at St. Joseph’s Catholic Church in Barstow, as they taught marriage preparation classes and served as Alter Server Coordinators for many years. In 2012, Joe moved to Albany, GA, and served with the Knights of Columbus at St. Theresa’s Church, where he earned his 4th Degree Knighthood and volunteered at many events. Joe was happily retired, having worked for 35 years in Civil Service. He retired in 2007 as Supervisor of Quality Control Branch of Fleet Support Division at the Marine Corps Logistics Base in Yermo, CA. However, he served most of his career as a Quality Control Inspector where he affectionately earned the nickname “Flashlight Joe.” Joe’s commitment to sending the highest quality vehicles to the Marines serving in harms way was well known and respected, and he received several awards for his service. Joe is survived by his children; Christine (Scott) Brehmer of Fredericksburg, VA, Eric (Tina) Barela of Barstow, CA, Steven Barela of Barstow, CA, Valerie (David) Rogers of Fredericksburg, VA, and his three grandchildren Jonathan Rogers, Hayden and Karley Barela. His brothers: Raymond (Susan) Barela of Fairfax, VA, Richard (Melissa) Barela of Wichita, KS, Peter (Shanda) of Barstow, CA, and sisters: Angela and Elizabeth Barela of Adelanto, CA, and Karen (George) Strait of Newberry Springs, CA, as well as numerous nieces and nephews. Joe was preceded in death by his parents, Jose and Clara Barela, brothers Eugene, Patrick and Michael Barela, his wife Darlene, and youngest son Jonathan. Joe will be remembered for his love of God, his devotion to his family, and his generosity. His sense of humor, wisdom, and strength will be greatly missed. Services for Joe will be held on April 22, 2022, at St. Joseph’s Catholic Church, 505 E. Mountain View St., Barstow, CA. The Rosary will be at 10:30 a.m., and Memorial Mass at 11 a.m. with burial to follow at Mountain View Memorial Park, 37067 Irwin Rd, Barstow, CA. Arrangements provided by Found and Sons of Fredericksburg, VA. Visit the online tribute to Joseph at foundandsons.com.

Joseph Daniel &#8220;Danny&#8221; Barela, beloved father, grandfather, and brother, went to be with the Lord on February 7, 2022. He passed peacefully with his children by his side at Mary Washington Hospital in Fredericksburg, VA. He was born... View Obituary & Service Information

The family of Joseph Daniel Barela created this Life Tributes page to make it easy to share your memories.

Send flowers to the Barela family.