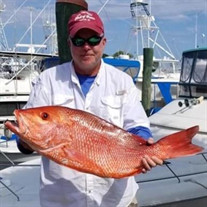 Joel Robert Black, 61, passed away Friday, October 9, 2020 after a courageous fight against metastatic melanoma. Joel was born February 26, 1959 in Washington D.C. to the late Robert and Elisabeth Black. He grew up in Falls Church and graduated from McLean High School in 1977. He then attended UA Mechanical Trade School in Maryland. Joel met and married his wife Cyndi in 1982 and soon thereafter moved to Culpeper to build their first home and raise a family. They resided in Culpeper for over 30 years before retiring to Palm Coast, Florida in 2014. There they took advantage of the warmer weather and the ample opportunities to do all the things he loved- golfing, fishing, boating, riding motorcycles, and traveling in their RV. He continued to spend his summers in Virginia with his children, enjoying time at the family home on Lake Louisa. Always hardworking and dependable, Joel joined the Steamfitter’s Union Local 602 and took a job with the Carrier Corporation where he worked for 35 years, moving up the ranks to become a highly regarded steamfitter, service supervisor, and contract salesman. He was an avid Washington sports fan, always cheering for the Senators/ Nationals, Redskins, and Capitals. He was so excited to see the Nationals win the World Series in 2019, and always started football season hopeful for another Super Bowl win. He was dedicated to his family and friends. His loss will be felt by many. Joel is survived by his wife of nearly 38 years, Cyndi; daughter Becca Buncie and her husband, Eric; son, Shaun Black and his girlfriend, Dominique Leon. He is also survived by his sister, Cecelia Black, numerous in- laws, nieces and nephews. Additionally, he leaves behind many friends in both Virginia and Florida, as well as his dog, Maggie. In addition to his parents, he is preceded in death by his brother, David. A memorial service will be held on Thursday, October 15, 2020 at 6 p.m. at Found and Sons Funeral Chapel of Culpeper, 850 Sperryville Pike, Culpeper, VA 22701. Due to COVID mandates, masks are required to enter the building. The family will receive friends two hours prior to the service. The family would like to invite those who are unable to attend in person to join the service via livestream at https://www.oneroomstreaming.com/view/authorise.php?k=160228039280547 An online guestbook and tribute wall are available at www.foundandsons.com Found and Sons Funeral Chapel of Culpeper is serving the family.

Joel Robert Black, 61, passed away Friday, October 9, 2020 after a courageous fight against metastatic melanoma. Joel was born February 26, 1959 in Washington D.C. to the late Robert and Elisabeth Black. He grew up in Falls Church and graduated... View Obituary & Service Information

The family of Joel Robert Black created this Life Tributes page to make it easy to share your memories.

Send flowers to the Black family.