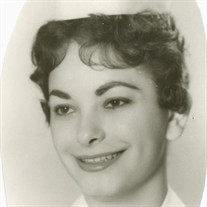 Joan Irene McHugh, 79, of Dale City, Virginia passed away peacefully at her new home in Mineral, Virginia on December 17, 2020 with her loving husband by her side. Joan was born to the late Joseph and Emma Markovich on February 4, 1941, in West Hazleton, Pennsylvania. She was a proud graduate of West Hazleton High School in 1958 and an even prouder graduate of the Hazleton State Hospital School of Nursing in 1961. Joan is survived by her husband Bernard McHugh, her high school sweetheart who she married June 30, 1962. They enjoyed a storybook love affair for the next 58 years. These years included 23 years of Joan sacrificing for her country and family as the wife of an Army officer and a mother of two small children during her husband’s two tours in Vietnam and over 12 moves. Unflappable, Joan raised those children and is survived by both Laurie Kane of Mineral, Virginia, and Brian McHugh of Nolanville, Texas. She is also survived by four adoring grandchildren ranging in ages from 18 to 25. Joan was a selfless person with an intense calling to help others. A calling she realized over her quarter of a century working as an accomplished registered nurse. A job where she demonstrated that, no matter what the task; be it serving as an OR nurse, as a care-giver in a nursing home, or working in a private practice, Joan was willing to give everything to bring comfort to others. With all of this, Joan was happiest being a wife and mother who brought nothing but joy and love to her family and she leaves behind nothing but beautiful memories. In her passing, as in all things, Joan did not want a big fuss made over her. In accordance with her desires, Joan will have a private Catholic Mass with only her immediate family. Her Urn will be kept with her beloved soulmate Bernard at their home on the fireplace hearth watching over “…my best friend, my support, and, best of all, my love”. The family requests in lieu of flowers, any donations be made to St. Jude’s Children’s Hospital or a mass be said in her memory at St. Jude’s Catholic Church in Mineral, Virginia.

Joan Irene McHugh, 79, of Dale City, Virginia passed away peacefully at her new home in Mineral, Virginia on December 17, 2020 with her loving husband by her side. Joan was born to the late Joseph and Emma Markovich on February 4, 1941, in... View Obituary & Service Information

The family of Joan Irene McHugh created this Life Tributes page to make it easy to share your memories.

Send flowers to the McHugh family.