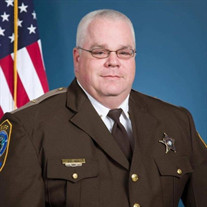 James Anthony “Tony” Sisk went home to be with the Lord on October 1, 2021. He died in the line of duty at INOVA Fair Oaks Hospital in Fairfax, Virginia. Sisk was a 27 year veteran of law enforcement and Captain of Patrol for Culpeper County Sheriff’s Office. He is survived by his wife of 30 years, Eileen, and daughters, Sarah Sisk Bullard (Nick) and Hallie Sisk (Zach); granddaughter, Lilly; his parents, Kerry and Patsy Woodward; sister, Carol Pulm; and brother, Jason Woodward. Captain Sisk, 50, a Culpeper native, graduated from Culpeper County High School in 1990. He began his life-long career in law enforcement in 1994. He began as a jail deputy under then-Sheriff Robert “Pete” Peters, advanced to Patrol, and later to Criminal Investigations. He was instrumental in the first SWAT team in Culpeper County and served on it from 1999-2004. In 2004, he served in the Culpeper Police Department, where he also was a member of the first CPD SWAT team from 2004-2005. In 2008 he moved to the Rappahannock County Sheriff’s Office, where he worked Patrol and Criminal Investigations. In 2012, he returned to his home county where he served with honor and distinction until his death. At his death, Captain Sisk was the commander of the Culpeper County Sheriff’s Office Patrol Division, and also supervised Civil Process operations. Prior to that, Captain Sisk’s duties included Lieutenant in Charge of the Court Division and Lieutenant in Charge of Patrol. His career was marked by continual education and advancement in law enforcement. He was well known as a veteran instructor in firearm usage being both knowledgeable and proficient in the field. In 2019, Captain Sisk was honored with a lifetime achievement award from the Culpeper Domestic Violence and Sexual Assault Task Force for his work in support of crime victims. Captain Sisk was a Master Mason since 1996 of the Fairfax Lodge 43 AF and AM. His life is marked by his service to others, his larger-than-life personality, and his love for the Lord. He was an avid long-range shooter who loved nothing more than to teach someone else how to shoot. His spare time was spent with his friends and family pursuing that shared passion. He knew no stranger and was a mentor to many inside and outside of law enforcement. A funeral service will be held Monday, October 11, 2021 at 10:00 a.m. at Eastern View Stadium, 16332 Cyclone Way, Culpeper with Pastor Phillip Walker, Pastor Steve Harrelson, and Pastor James Mack officiating. Interment will be private. In lieu of flowers, the family asks for donations to the Culpeper Sheriff’s Office Christmas Program and/or the Culpeper Sheriff’s Office Memorial for Fallen Officers at 14023 Public Safety Ct, Culpeper, VA 22701. An online tribute wall and guestbook are available at www.foundandsons.com Found and Sons Funeral Chapel of Culpeper is serving the family.

James Anthony &#8220;Tony&#8221; Sisk went home to be with the Lord on October 1, 2021. He died in the line of duty at INOVA Fair Oaks Hospital in Fairfax, Virginia. Sisk was a 27 year veteran of law enforcement and Captain of Patrol for Culpeper... View Obituary & Service Information

The family of James Anthony "Tony" Sisk created this Life Tributes page to make it easy to share your memories.

James Anthony “Tony” Sisk went home to be with the Lord on October...

Send flowers to the Sisk family.