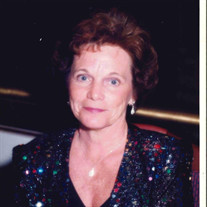 Jacqueline A. “Jackie” Brewer, 82, died Friday, September 3, 2021 at her home. She was born June 1, 1939 in Arkville, NY to the late Zealiah and Ethel Eighmey. Jackie retired after 30 plus years as a senior accountant from Payne Publishers, where she also served on the board of directors. She was a member of Hopewell United Methodist Church and a hospital volunteer. She led Bible study for her neighborhood for seven years as well as teaching Bible school. Jackie was also a foster parent for seven years. Other enjoyments of Jackie’s included her book club, and traveling; where she had the opportunity to visit all 50 states. Jackie is survived by her five children, David L. Brewer, Linda L. Lowery, Lisa L. Wolfe (Robert), Tina L. Garrison (Jerry), and John David Brewer; grandchildren, Justin Lowery (Ashly), Angela Davis (Curtis), Amanda Helton (Adam), April Lowery (Justin), Devin Yankey (Jessica), David Brewer, Jr. (Leslie), Zachary Wolfe, and Taylor Huff. She is also survived by her 18 great grandchildren, and 2 great great grandchildren. In addition to her parents, Jackie is also preceded in death by her brother, Howard Eighmey. A funeral service will be held Saturday, September 11, 2021 at 2 pm at Found and Sons Funeral Chapel, 850 Sperryville Pike, Culpeper, VA with Pastor Mike Evans officiating. The family will receive friends one hour prior to the service. Interment will follow at Hopewell United Methodist Church Cemetery, 23557 Lignum Road, Lignum, VA 22726. An online guestbook and tribute wall are available at www.foundandsons.com Found and Sons Funeral Chapel of Culpeper is serving the family.

The family of Jacqueline "Jackie" A. Brewer created this Life Tributes page to make it easy to share your memories.

Send flowers to the Brewer family.