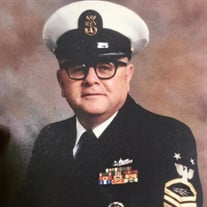 Jack Lewis Watson, 85, passed away Sunday, January 16, 2022 at Mary Washington Hospital. A true Patriot in every aspect of the word; Jack first enlisted into the reserves at 17 and then into full service with the United States Navy at 18. After 32 years of Faithful service, Navy Master Chief Jack Lewis Watson retired in 1986. From there he would go into Civil Service with the DoJ/Pentagon Joint Chief’s office for another 15 year career. After his second retirement he spent years traveling to all of the 50 States with his beautiful wife Luise and spending quality time with his family, enjoying football every weekend and time with his children and grandchildren. After the passing of his wife; Jack would go to live with his youngest son Michael and his family; where he spent the last 15 years of this life looking out over the water, sharing a glass of wine with friends, time with his family, being involved in church life at Choice Baptist, and loving his pups, especially his precious English Bulldog, Lily. While health challenges in the final 5 years kept Jack at home often, he was surrounded by the love of his family and caregivers, Pam deWolfe, and many wonderful physicians, therapists, and in home assistants from all around Fredericksburg. Jack is eternally loved and survived on Earth by; His children (in order by age, oldest first) son Terry Rexroth; daughter Kelly (Dan) Conners; son Steven (Gail) Clem; son David (Donna) Watson; son Michael (Rachel) Clem; his grandchildren David, Shannon, Brittany, Courtney, Cameron, Alexander, Makenzie, Dylan, Rachel and Mack; as well as 6 great grandchildren. He will also be remembered and loved by his brother Jerry Carman, his best friend of over 80 years, Carl Spangler (Spang), his beloved friend and companion from across the pond, Gabby Longmuir; and countless others in his large extended family, friends, past coworkers, and his CBC Church family. Jack was met at the gates of Heaven by these special people who preceded him in death; his Beloved Wife Luise Watson, his son Shawn Watson, his brothers Pat Watson and Mike Watson, his parents; and many other friends and family who have passed over the many years of Jack’s life. Jack’s family will receive friends from 6:00-8:00 p.m. Sunday, February 6, 2022 at Found and Sons Funeral Chapel, 10719 Courthouse Road, Fredericksburg. A funeral service will be held at 11:00 a.m. Monday, February 7, 2022 in the funeral home chapel. Burial will follow in Quantico National Cemetery. In lieu of flowers, donations can be made in Jack’s name to the Scleroderma Foundation srfcure.org. Online condolences may be expressed to his family at foundandsons.com.

Jack Lewis Watson, 85, passed away Sunday, January 16, 2022 at Mary Washington Hospital. A true Patriot in every aspect of the word; Jack first enlisted into the reserves at 17 and then into full service with the United States Navy at 18.... View Obituary & Service Information

The family of Jack Lewis Watson created this Life Tributes page to make it easy to share your memories.

Send flowers to the Watson family.