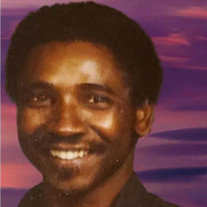 Herman Cefus Newman was born August 8, 1958, in Culpeper, Virginia. He departed this life on Saturday, April 23, 2022 at Novant Health UVA Culpeper Hospital. He was preceded in death by his parents George and Ann Mildred Newman, his sister Carolyn Turner and brothers Ronnie, Charles, and James Willie. Herman was a hardworking man and loved fishing. He was a self-taught mechanic; tree climber and brick layer apprentice. Herman always had a beautiful smile no matter what he went through. He loved life and his adopted family: Leroy Holmes, Henry Ford and Neal Washington, Robert, and Phyllis Mudd, Raymond Mudd. For Herman his added-on family meant the most to him. He loved talking about his daughter and how he wanted her to be the best she could be. Life for Herman was all about family and friends. During the time of incarceration, he received his G.E.D and went on to further his education in Law. He is survived by his daughter Joyrae Nicole Long (Fiancé Rufus Mayfield), and six grandchildren Alexis, Michael, Christian Braxton, Ameria, Ava and Ethan Mayfield. He has three sisters Patricia Jackson, Harriet Portillo (Luis) and Sarah Allen, one brother Joseph. He has two aunts Elsie Jackson, Sarah Dunklin (Leo), one uncle Billie Newman (Loretta). A devoted friend Gloria Long, God son Darnell Penn. A host of nieces, nephews, and friends. A memorial service will be held at 1:00 p.m. on Tuesday, May 3, 2022 at Found and Sons Funeral Chapel, 850 Sperryville Pike, Culpeper, Virginia. The family would like to invite those unable to attend in person to join the service via live stream at https://view.oneroomstreaming.com/authorise.php?k=1651600820181970 An online guestbook and tribute wall are available at www.foundandsons.com Found and Sons Funeral Chapel of Culpeper is serving the family.

Herman Cefus Newman was born August 8, 1958, in Culpeper, Virginia. He departed this life on Saturday, April 23, 2022 at Novant Health UVA Culpeper Hospital. He was preceded in death by his parents George and Ann Mildred Newman, his sister... View Obituary & Service Information

The family of Herman Cefus Newman created this Life Tributes page to make it easy to share your memories.

Send flowers to the Newman family.