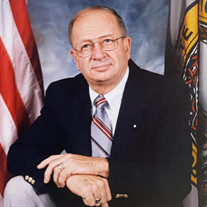 Henry B. Jenkins, 89, of Culpeper, VA died Saturday, May 1, 2021 at Novant Health Systems UVA Culpeper Hospital. He was born June 18, 1931 in Etlan, VA to the late Walter and Virder Jenkins. Henry was a member of Culpeper Baptist Church. He retired from the Virginia State Police after 34 years. He was a member of Fairfax Masonic Lodge #43 for 40 years and was a Past Master. He was a Past District Deputy Grand Master for the 7th Masonic District. He was also a member of the Scottish Rite, Royal Arch Chapter #13 and the Knights Templar Commandery #25. He was a past member of Linn Banks Lodge in Madison, Va. Henry is survived by his wife of 69 years, Ethel Mae Jenkins, two daughters; Sharon Snoderly (James) and Lisa Setzer (Tim), four grandchildren; Chad Lee (Ashlee), Allison Snoderly, Kara Dulin (Luke), and Bailey Edmonds (Chaz). Additional survivors include seven great grandsons; Gunner, Hank, and Knox Lee, Fletcher, Finnley, and Fisher Dulin, and Axel Edmonds. In addition to his parents, Henry is preceded in death by his son, Henry B. Jenkins, Jr., and his sister, Doris Jenkins Taylor Gardner. A funeral service will be held Wednesday, May 5, 2021 at 11:00 at Found and Sons Funeral Chapel with Pastor Hans Murdock officiating. Interment will be private. The family would like to invite those that are unable to attend to join the service via live stream at https://view.oneroomstreaming.com/authorise.php?k=1620171763113844 In lieu of flowers memorial contributions may be made in Henry’s name to Culpeper Baptist Church, 318 S. West Street, Culpeper, VA 22701. The family would like to express their gratitude for the assistance of many caregivers including Home Instead and Actikare. They would also like to thank Heartland Hospice and Hospice of the Piedmont for their care and support. An online tribute wall and guestbook are available at www.foundandsons.com Found and Sons Funeral Chapel of Culpeper is serving the family.

Henry B. Jenkins, 89, of Culpeper, VA died Saturday, May 1, 2021 at Novant Health Systems UVA Culpeper Hospital. He was born June 18, 1931 in Etlan, VA to the late Walter and Virder Jenkins. Henry was a member of Culpeper Baptist Church. He... View Obituary & Service Information

The family of Henry B. Jenkins created this Life Tributes page to make it easy to share your memories.

Send flowers to the Jenkins family.