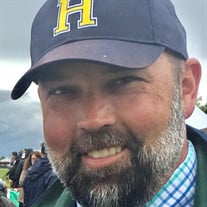 Frank “Lloyd” Gimbel II, 50, of Culpeper, passed away Monday, July 5, 2021, peacefully at his home surrounded by his family after a year long battle with Creutzfeldt-Jakob Disease (CJD). He was born June 26, 1971, in Virginia, to Frank and Bonnie Gimbel. Lloyd graduated from Culpeper County High School and then went on to attend James Madison University. He majored in health and physical education. From here Lloyd began teaching and coaching. He taught and coached football and basketball at Thornburg Middle School. He coached numerous regular season Little League teams and All-Star teams; he led two of these All-Star teams to the state tournament. Lloyd started his coaching career at Highland School in Warrenton in 2011. Here, he coached middle school basketball, baseball and golf and varsity baseball. Lloyd was an avid fan of UVA sports, especially basketball. He loved family vacations to Hilton Head Island. Lloyd’s true passion was his three boys. From T-ball through high school baseball he was there as a father, a coach, and above all as their biggest fan. The baseball diamond was his second home, and he never missed a single game until this year. Now we find comfort in knowing that he will never miss another game. In addition to his parents, Lloyd is survived by his wife of 21 years, Christina Mills Gimbel, and their three sons, Edward Stinson Gimbel, Jackson Thomas Gimbel, and Ryan Stephen Gimbel. He is also survived by his brother Greg Gimbel and his sister Kelly Gimbel. His father and mother in-law, Earl and Karen Mills; brother- in-law Steve Mills (Melissa); sister-in-law Erin Joiner (Jason); and nephews Derek Gimbel and Jacob Mills. We would like to thank the nurses and staff of Hospice of the Piedmont, especially Joni Moreland for her kindness and care of Lloyd over the past six months. We also would like to especially thank the Anderson family (Brett, Ann-Marie, John William, Benjamin, and Nicholas) for their never ending love, support , and assistance over the past year. A visitation will be held Sunday, July 11, 2021 from 6:00-8:00 pm at Found and Sons Funeral Chapel, 850 Sperryville Pike, Culpeper, Virginia. Funeral services will be held Monday, July 12, 2012 at 11:00am at Found and Sons Funeral Chapel with the Rev. Dr. Wayne Bernardo officiating. Interment will be private. Pallbearers will be Nicholas Anderson, Eric Wilson, Jasper Faulk, Garrett Pancione, Ty Gravett, and Ed Wagner. The family requests that you donate a tree, outdoor flower, or plant in Lloyd’s honor for his memorial garden. These can be sent to Found and Sons Funeral Chapel or the family’s home. Kim Jefferson at Windmill Heights Garden Center (540-825-2059) is accepting orders for a specific plant or tree, or monetary donations for the family to select something for the memorial. An online guestbook and tribute wall are available at www.foundandsons.com. Found and Sons Funeral Chapel of Culpeper is serving the family .

The family of Frank "Lloyd" Gimbel II created this Life Tributes page to make it easy to share your memories.

Send flowers to the Gimbel family.