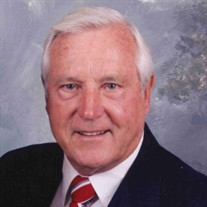 Not sure what to send?

Frank Edward Brown, Sr., 90, of Culpeper, died peacefully Sunday, January 2, 2022 surrounded by his son and daughter. He was born July 7, 1931 in Raccoon Ford to the late Judson and Janie Brown. Frank retired from VDOT after 41 years as the... View Obituary & Service Information

The family of Frank Edward Brown Sr. created this Life Tributes page to make it easy to share your memories.