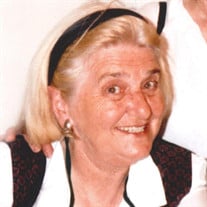 Mrs. Evelyn Mary Chewning, 91, of Spotsylvania, passed away Thursday at the home of her grandson. Originally from Bell Island, Newfoundland, Evelyn attended St. Edwards Convent School and studied business at Immaculate Conception Academy. She married Henry Floyd Chewning in 1950 and became a military wife and mother. Evelyn demonstrated her personal strength, faith and fortitude when upon her beloved husband’s death, she operated and grew the business they had begun together, H.F. Chewning Grocery, all while raising her young family. She was a fixture in the community for 50 years, but the role she valued most was that of mother, grandmother, and great-grandmother. Evelyn was greatly loved, and will be greatly missed. She is survived by her son, John W. Chewning, and her daughter, Koren Chewning, both of Spotsylvania, three grandsons, David Bull (Renee), of Henrico, James Chewning (Lindsay) and William Chewning, both of Spotsylvania; five great-grandsons, Joseph Bull, of Henrico, James, Henry, Marshall and Benjamin Chewning, all of Spotsylvania; sisters, Margaret Mackenzie (Colin), of Ottawa, Ontario, and Eleanor Dominic of St. John’s, Newfoundland, as well as nieces and nephews in Canada and the United States. Evelyn was preceded in death by her husband, Henry Floyd Chewning, daughter, Beverley Ann Bull, son, James Harvey Chewning, III, granddaughter, Sarah Lee Bull, her parents, William and Christine Thistle, and her brothers, William Thistle and Henry Thistle. A Mass of Christian burial will be held at 10:30 am on Friday, March 19, 2021 at St. Matthews Catholic Church, 8200 Robert E. Lee Dr, Spotsylvania. Interment will follow in Sunset Memorial Gardens. In lieu of flowers, please make a donation in her memory to the charity of your choice.

The family of Evelyn Mary Chewning created this Life Tributes page to make it easy to share your memories.

Send flowers to the Chewning family.