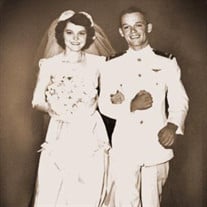 Dorothy Ellen Turpin Morris, born August 27, 1925 in Keystone, West Virginia, departed on her last journey at the age of 95 to be with her husband, LCDR John Robert Morris, who departed on November 17, 2013 at age 88. She was living in Culpeper, Virginia at the time of her death, but her adopted home was St. Louis, Missouri, where the family settled when John retired from active duty. Dorothy and John met on the campus of Berea College in 1943. John was part of the Navy V5/V12 program, which paid college tuition for active duty servicemen. Dorothy worked as a student server in the dining room and met John as she served him breakfast. They married in 1945 and she left college to be a mother and homemaker, serving John breakfast every day until his death. They were known to their friends and family as “Dottie and John.” Dorothy loved being a mother and she is survived by their children: Patricia S. Morris, Carolyn A. Courtney (deceased), Katherine M. McCann (Brian), John R. Morris, Jr. (Renee), and Thomas E. Morris (Carolyn); grandchildren: Cree Vega, Amy Atwood (Paul), Sara Edwards-Auguste (Rene), Katy Morris, John Morris III, Brittany Johndrow (Steven), and Collin McCann (Erin); and great grandchildren: Carolena, Michael, Mia, Thomas, Levi, and Caroline. Dorothy loved being a Navy wife, traveling from Washington State to Newport Rhode Island to Florida and many places in between – always near the beach, where she and the children spent many a sunny day. They were stationed in Morocco for two years with their two oldest children and Dorothy appreciated learning about the different culture and traditions of the native Arabic population. She often referred to herself as a Tennessee hillbilly, where she grew up, but she was happy to make a home wherever they were stationed. A friendly, talkative woman, she made friends wherever she was. She also loved to cook and was always prepared with new recipes to try for visiting family members. When her girls were young, she made matching dresses for every special occasion; she taught all three of them to sew and do decorative needlework, creating in each of them a lifelong long love of handcrafting. Dorothy and John were both very involved in Bellefontaine United Methodist Church life in St. Louis. He was a deacon and she volunteered for the Women’s Circle. They were generous and loving individuals, grateful for the good life they lived together. Dorothy will be buried next to John at Jefferson Barracks National Cemetery in St. Louis following a gravesite memorial service as soon as it is safe for family members to travel and gather to celebrate Dorothy’s life. In lieu of flowers, friends and family are encouraged to make a donation in memory of Dorothy T. and John R. Morris to Berea College, V5/V12 Scholarship Fund, 104 Chestnut St., Berea, KY 40404. An online tribute wall and guestbook are available at www.foundandsons.com Found and Sons of Culpeper is serving the family.

Dorothy Ellen Turpin Morris, born August 27, 1925 in Keystone, West Virginia, departed on her last journey at the age of 95 to be with her husband, LCDR John Robert Morris, who departed on November 17, 2013 at age 88. She was living in Culpeper,... View Obituary & Service Information

The family of Dorothy Ellen Morris created this Life Tributes page to make it easy to share your memories.

Send flowers to the Morris family.