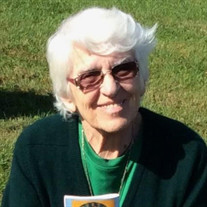 Culpeper VA; Dorothy “Dot” Deighan (Alves), 85, passed away peacefully on the morning of Sunday 28 Feb 2021. She was preceded in death by her husband William F. Deighan in 2019 and son Bryant M. Deighan in 2008. She was happily married to William F. Deighan for 61 years. Born in Pawtucket RI, daughter of Peter and Virginia Alves. She graduated from East High School in Pawtucket R.I. After graduating she joined the U.S. Army. She served in Japan, at Fort Belvoir in Virginia and the Pentagon. After leaving the U.S. Army, she married William “Bill” Deighan and started a family in Pawtucket. They raised two sons, Bryant and Patrick. Over the next few years while working at Corning Glass Works then GTE, she rose to become Quality Control Inspector. While at GTE, she also worked part-time at the U.S. Post Office as a Letter Sorter. After retiring from GTE and the Post Office, she rejoined her husband Bill in Tampa FL. Where her love, energy and time were spent volunteering at the Veterans Hospital where she assisted visitors and patients; Meals on Wheels where she and her husband delivered hot, nutritious meals to the ill, aging and convalescing residents of Tampa. The Moffitt Cancer Center in various departments and the gift center. She was very active at the Corpus Christi Catholic Church where she was a eucharistic minister and usher. She was also involved in many parish activities and groups. Most of all, her first love and passion were her grandchildren Shannon, Clair and Corey. Dot, Bill and the grandkids traveled to Ireland, Canada, New York City, Disney World, Universal Studios Florida, Busch Gardens Tampa. When not on the road she and Bill could be found at the park, pool or the movies. She was the first with kind word or gesture. We were blessed to have been part of her life. In lieu of flowers, a donation in kind to one of the following, St. Jude’s Children Hospital, the Alzheimer’s Association or Heartland Hospice of Richmond. She is survived by her son Patrick, wife Maggie; grandchildren Shannon and husband Brandon Miller, Clair Deighan, Corey Deighan; her great-grandchildren Elizabeth and Natalie Miller. She joins her 4 brothers, 2 sisters in Heaven. She leaves behind many nieces, nephews and close family members. She’ll be interned in a grave side ceremony at St. Francis Xavier Cemetery on West High Street Gettysburg PA on 17 April at 10am.

The family of Dorothy "Dot" Deighan created this Life Tributes page to make it easy to share your memories.

Send flowers to the Deighan family.