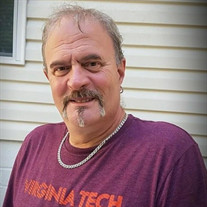 Donald Eugene Doyle, Jr., son of Lois Doyle Aylor and Donald Eugene Doyle, Sr., was born in Havre De Grace, MD on December 15, 1963. He spent his last day at his home in Unionville, VA with us at the age of 56 on November 3, 2020. He is survived by his wife, Melissa Doyle; his children, Daniel Doyle and his wife, Tamara Kallin, Amanda Doyle and Marriah Jeffries; his mother, Lois Doyle Aylor; his sister, Cora Sue Doyle Gomez and her husband, Frankie; his brother, Michael Doyle; his niece, Rosa Fincham and her husband, Austin Staton; his nephew, Joshua Fincham and his children, Sophie and Runa; several other family members and friends. He is preceded in death by his father, Donald E. Doyle, Sr. Sgt. Doyle began his military career on August 13, 1985 with the US Army’s 428th Medcom Unit in medical supply for Operation Desert Storm. He went on to have an eight year career in the military where he traveled and learned many skills and finally found his perfect fit as an Army mechanic. However, his patriotism didn’t end when he left active service, he continued his career working for the Department of the Army up until his retirement. Don was known by all who loved him as a tech geek, sports fan and know-it-all nerd. He spent his free time taking apart and putting back together computers, playing online games, staying up to date on the newest technology as well as possessing a wealth of knowledge that would give Webster a run for his money. Don was a Washington Redskins fanatic born with burgundy and gold blood pumping through his veins. He spent many Sundays on his fan cave couch coaching and screaming like he was in the stands. He would ask that if you remember anything about him let it be two things: That he loved his country and his family and was a fierce protector of both. Where we go one, we go all…….. A celebration of life will be held on Thursday, November 12, 2020 from 12 pm to 1:30 pm at Found and Sons Funeral Chapel, 850 Sperryville Pike, Culpeper. Due to COVID 19 mandates, masks are required to enter the building. The family invites those who are unable to attend to join them through our live stream link at https://www.oneroomstreaming.com/view/authorise.php?k=160478349884620 A graveside service will follow at 2 pm at Culpeper National Cemetery (new section) with military honors provided by the U.S. Army and VFW post 2524. In lieu of flowers, donations can be made in his name to the Vietnam Veterans Memorial Fund, https://www.vvmf.org/. An online guestbook and tribute wall are available at www.foundandsons.com. Found and Sons Funeral Chapel of Culpeper is serving the family.

Donald Eugene Doyle, Jr., son of Lois Doyle Aylor and Donald Eugene Doyle, Sr., was born in Havre De Grace, MD on December 15, 1963. He spent his last day at his home in Unionville, VA with us at the age of 56 on November 3, 2020. He is survived... View Obituary & Service Information

The family of Donald Eugene Doyle Jr. created this Life Tributes page to make it easy to share your memories.

Send flowers to the Doyle family.