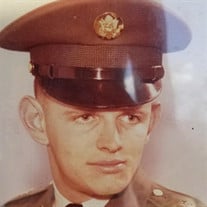 Clyde Hamrick Sr., 79, of Spotsylvania County passed away Monday April 11, 2022, followed shortly after by his wife of 55 years, Joyce Noel Hamrick. He joined his son Marvin Hamrick Sr, and grandson, Jeremey Hamrick in heaven. He is survived by his brothers, Bruce Hamrick (Barbara) and Wayne Hamrick (Janet); his children, DeAnna Hill, Sherril Snyder (Robbie), Ronnie Chewning (Theresa), and Clyde Hamrick Jr. (Amanda); his grandchildren, Randy, Brandy, Crystal (Richard), Ashley – Peeka (Jacob), Marvin Hamrick Jr (JR) (Emily), Travis (Mary), Courtney, Katelyn, Madison, Rory, and Erin, and his great-grandchildren, Scarlett, Camden, Lily, McKayla, Addison, Colton, Jaxon, Alivia, and Miranda. Clyde loved serving his country. As a sergeant in the United States Army, he served as a tank commander and later as a SAPPER trainer with the Virginia National Guard. He went on to have a 40 + year career at Virginia Department of Transportation, retiring as a Chief Inspector. He loved crossword puzzles, trying to fish, and taking care of his dogs, and yard. He was a NASCAR enthusiast, Redskins fanatic, and loved watching the games and races with his children and grandchildren. His greatest joy later in life was spending time with his grandchildren and great-grandchildren, taking them to the car wash, spoiling them at the store, and going for ice cream. The family will receive friends from 6:00-8:00 p.m. Thursday, April 21, 2022, at Found and Sons Funeral Chapel, 10719 Courthouse Road, Fredericksburg. A graveside service will be held at 11:00 a.m. Thursday, April 28, 2022 in Lakewood Cemetery in Bowling Green, VA. In lieu of flowers, the family requests remembrances are made in the form of donations to the American Cancer Society.

The family of Clyde Stafford Hamrick created this Life Tributes page to make it easy to share your memories.

Send flowers to the Hamrick family.