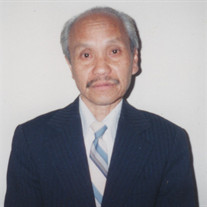 Chuk “Tommy” Yin Moy, 86, of Culpeper, VA died Friday, July 23, 2021 at University of Virginia Hospital. He was born April 6, 1935 in China to the late You Woh and Fung Sau Moy. At the tender age of just 16, a fearless and adventurous Tommy Moy left China and headed to the United States in search of opportunity and a better life. In San Francisco, CA, he found work in various jobs to make ends meet for several years and later moved on to Chicago, IL to work at his father’s laundromat. The “rolling stone” moved on to New York City in the early 1960s, where he found better job opportunities working at a laundromat, owned by Helen Ng’s family. Not too long afterward, in 1964, Tommy and Helen (acquaintances in China) reunited and were married. They moved to Rockville, MD, where they settled and started a family. Arthur, Alan, and Jeffrey were born between 1966 and 1974. During this time Tommy realized, and began to pursue, his passion for cooking, training with many Master Chefs to eventually become one himself at the Rickshaw Chinese Restaurant. In 1976, Tommy and his family moved to Culpeper, VA, where he opened his own restaurant, The Jade. Culpeper residents enjoyed Tommy’s excellent cuisine, Origami paper creations, and down home hospitality at The Jade for almost two decades. In 1997, Tommy continued cooking great meals for his patrons at the Serendipity, as co-owner with his middle son, Alan. Having “Lived Life to its Fullest”, Tommy enjoyed retirement at a much slower pace - growing flowers and vegetables in his garden, spending time with family and friends, helping out at the Dragon Chef, and going fishing with his grandsons Nathan and Lincoln. He continued to enjoy creating delicious feasts for family holidays, but on most any warm, sunny day otherwise, you could find him cruising around Culpeper, looking for a good fishing hole! Tommy loved to fish and spent many of his last days doing just that! RIP Tommy We Love You! Tommy is survived by his wife of 56 years, Helen Moy, three sons; Arthur Moy, Alan Moy (Stephanie) and Jeffrey Moy (Scottie), two grandchildren; Nathan Moy and Lincoln Moy, one brother, Chick Ho Mui (Gun Yun Mui), nieces; Mary Mui and Agnes Mui, and nephew, Paul Mui. Additional survivors include his niece in law, Min Mui, grandnieces; Lucy Mui and Wing Pui Mui, grandnephew, Kevin Mui as well as a host of other family members. In addition to his parents he is preceded in death by two nephews; Shu Fan Mui and Gin Sun Moy. A visitation will be held on Wednesday, July 28, 2021 from 6:00 pm until 8:00 pm at Found and Sons Funeral Chapel, 850 Sperryville Pike, Culpeper, VA 22701. A committal service will be held Thursday, July 29, 2021 at 2:00 pm in Fairview Cemetery, Culpeper, VA with Reverend Travis Phillips officiating. In lieu of flowers, the family asks that you please support a local restaurant in honor of Tommy. An online tribute wall and guestbook are available at www.foundandsons.com Found and Sons Funeral Chapel of Culpeper is serving the family.

The family of Chuk "Tommy" Yin Moy created this Life Tributes page to make it easy to share your memories.

Send flowers to the Moy family.