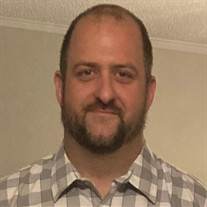 Christopher Thomas Blackman, 36 of Bumpass, VA passed away suddenly on August 23, 2021. He is preceded in death by his grandmother, Patricia Blackman. He is survived by his wife Catherine and two daughters Gabriella and Maddison. His parents Tammy and Richard Thomas, Grandfather Thomas Blackman, sister Shauni and Steven Isenberg and their two sons Parker and Shane. His sister-in-law Lyndsey and Dan Dennison and their children Gracie and Carlie. Brother-in-law Jeff Lavin and his wife Lauren and their children Luke and Lawson and mother and father-in-law Gina and Jeff Lavin. As well as many other members of extended family. Christopher was a long-time employee of Rappahannock Goodwill Industries. He worked his way up from a warehouse employee to a Systems Administrator. He had most recently started a job working for Spotsylvania County government in the same capacity. Christopher enjoyed spending time with his family and would often be found playing with his two young daughters. He was a devoted partner to his wife and an amazing father. A favorite game between him and his oldest Gabriella was hide and seek where he would have to find her upon his return home from work to give her hugs and kisses. His joy in life were his children. He was passionate about fatherhood and put them first before everything. Gabriella is the epitome of a “daddy’s girl” and Maddison completely adored him. He was their hero and champion from day one. He was an avid animal lover and had three dogs and two cats. He couldn’t bear to turn away an animal that needed to find a good home and would post on social media to help find forever homes for strays. Christopher was best known for his boisterous sense of humor and being a “gentle giant”. He was a lifelong NY Giants fan and knew a love of football from an early age. He was a defensive tackle for his high school football team at Colonial Forge in Stafford. A memorial will be held at Grace Church in Fredericksburg located at 1141 Heatherstone Dr, Fredericksburg, VA Saturday, September 11 at 10am with a visitation to follow. In lieu of flowers his mother is asking for a donation to be made to her church which has supported her immensely through this tragic time. A go fund me page has been created by his sister Shauni Isenberg and sister in law Lyndsey Dennison to help his family with immediate expenses. https://gofund.me/9c099405 Christopher Thomas Blackman was a humble and kind man. He was an incredible son, husband, father, brother and friend. The weight of his absence will be felt by all who knew him.

Christopher Thomas Blackman, 36 of Bumpass, VA passed away suddenly on August 23, 2021. He is preceded in death by his grandmother, Patricia Blackman. He is survived by his wife Catherine and two daughters Gabriella and Maddison. His parents... View Obituary & Service Information

The family of Christopher Thomas Blackman created this Life Tributes page to make it easy to share your memories.

Send flowers to the Blackman family.