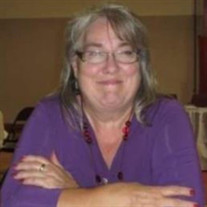 Betty Arla Gibson, aka Mamaw B, known to many for her famous hugs and sunny personality, died from complications due to Covid-19 on Thursday, February 24, 2022, at Spotsylvania Regional Medical Center in Fredericksburg VA. She was 75. She... View Obituary & Service Information

The family of Betty Arla Gibson created this Life Tributes page to make it easy to share your memories.

Betty Arla Gibson, aka Mamaw B, known to many for her famous...

Send flowers to the Gibson family.