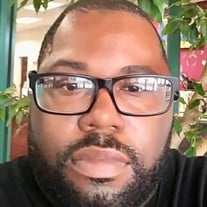 Anthony “AT” Thacker, IV, 36, of Culpeper, VA departed from this earth unexpectedly on Saturday, March 19, 2022. Anthony was born on April 24,1985 to Tina L. Thacker and the late Anthony Thacker III, in Culpeper, VA. AT was one of the most kind hearted people you will ever meet and would do just about anything for anybody. He had a contagious smile that would brighten your worst day, and a laugh that would crack you up without anything being funny. AT was a diehard fan of the Philadelphia Eagles, and an avid follower and supporter of the sport of drag racing. AT was an extreme supporter of his family in all aspects. He enjoyed spending time at the race track supporting his brother (Andrew/“Dru”) and Uncle (Ryan/“Coodie”) and was a fan of numerous other racers. He would also spend hours at the football fields supporting his brother (Tyrone) whether he’d be playing or coaching the game. AT had a passion for detailing cars and operated his own mobile detailing company “Street Dreamz Mobile Detailing”, and also worked at a local Carwash for some time. AT recently developed a love for riding scooters/mopeds earning himself the nickname of “Crash Bandicoot” from his brother Tyrone due to multiple accidents. Anthony is survived by his mother Tina Thacker; a daughter Angel; brothers, Andrew Thacker and Tyrone Butler; a sister, Krisha Syrkes; grandparents, Charles Franklin(Joyce), Great Grandmother Ruby Orange, Lionel Wood, and Emily Kinney; uncles, Ryan Franklin, Bryan Franklin, Charles Franklin Jr., and Duane Wood; aunts, Darlene Keeton, Missy Harris, and Barbara Kinney; nephews Avante & Ahmeer Thacker, Brycen Butler, and Octavus Berkley; nieces, Amiyah Thacker, Alyvia Butler, and Aryana Brooks; and a host of close cousins, great aunts, great uncles, and friends. Anthony had a special friend Jennifer Taylor of Clifton Forge VA. AT is preceded in death by his Father Anthony Thacker III. A Celebration of Life will be held at 4:00PM on Sunday April 3, 2022 at Found and Sons Funeral Chapel, 850 Sperryville Pike, Culpeper, VA with Reverend Sylvester Brown officiating. The family will receive friends and family two hours prior to the service for viewing beginning at 2:00PM. The family invites those unable to attend to watch via livestream at https://view.oneroomstreaming.com/authorise.php?k=1648334160174933 An online guestbook and tribute wall are available at www.foundandsons.com.

The family of Anthony "AT" Lionell Thacker IV created this Life Tributes page to make it easy to share your memories.

Send flowers to the Thacker family.