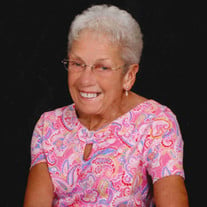 Annie “Fay” Brown, 87, of Midlothian, Virginia, passed away on February, 13, 2022. Fay was born on September 18, 1934, to the late Odell and Margaret Whitley. She is survived by her husband of 65 years (and high school sweetheart), Billy E. Brown. Fay is also survived by her two daughters, Terry Brown and Rebecca Abecassis (Andre); two grandchildren, Jessica Deleo (Richard) and Will Black; and two great-grandchildren, Nora Deleo and Navy Deleo. Fay was preceded in death by her five siblings. Fay took pride in being a Mother, a Grandmother, and the last ten months of her life, a Great-Grandmother. Fay loved sewing for her home and her family, making holiday wreaths, and flower arranging. She enjoyed working in her vegetable garden, canning vegetables, and making jelly. Her home always included an abundance of plants, and she could nurse any plant back to life. Fay and Billy enjoyed several years of traveling to Florida for the winter months, building a group of snowbird friends on Marathon Key. A final love was her sweet dog, Cody, who could always be found lying contentedly next to her on the sofa. Fay was a member of the Culpeper Baptist Church for 42 years, and she enjoyed working on the Flower and Kitchen Committees. Fay loved singing in the choir and supporting some of the children’s programs at the church. Fay and Billy moved to the Richmond area in 2017, where they have built a community in the Brandermill Woods independent living neighborhood, where Fay enjoyed bingo games, exercise classes, and crafting sessions. Fay and Billy have been members of the Bon Air Baptist Church since coming to the Richmond area. A visitation will be held from 10:00 to 11:30 a.m. on Tuesday, February 22, 2022 at Found and Sons Funeral Chapel, 850 Sperryville Pike, Culpeper, VA. Interment will be held privately with Pastor Dan Carlton officiating. In lieu of flowers, donations can be made to the Culpeper Food Closet (https://www.ststephensculpeper.net/culpeper-food-closet/) , which provides food and personal care items to many residents in the Culpeper area. An online guestbook and tribute wall are available at www.foundandsons.com Found and Sons Funeral Chapel of Culpeper is serving the family.

The family of Annie Fay Brown created this Life Tributes page to make it easy to share your memories.